Happy Cyber Monday! Personally, I always look forward to every Monday because they are my 52 Chances each year, in which I get to share Memories of My Mom with all of you!

Today is, among other things, Cyber Monday, which is always the Monday after Thanksgiving. “Cyber Monday” was officially named so by the NRF (National Retail Federation) in 2005, when consumers had noticeably increased shopping online; particularly at work, after the Thanksgiving holiday.

Ironically, the virtual shopping tradition was initially conceived by retailers to encourage people to shop online for what they wanted when they couldn’t find it at their local brick-and-mortar stores or couldn’t even get to the actual stores at all, due to other responsibilities, such as work.

Since early in the new millennium, the increase in online shopping has been causing a falling Dominos effect on many stores and malls across America. Consequently, store and mall owners have been forced to close their brick-and-mortar doors permanently – and at alarming rates.

The large department store chains that “anchored” the malls, like Sears, JC Penny’s, and Macy’s, started depleting first. With the advancements made in the world-wide web, the way of shopping and peoples’ needs and wants had, once again, evolved – a new generation of “convenience” cyber shopping was embraced, especially among teens and young adults. 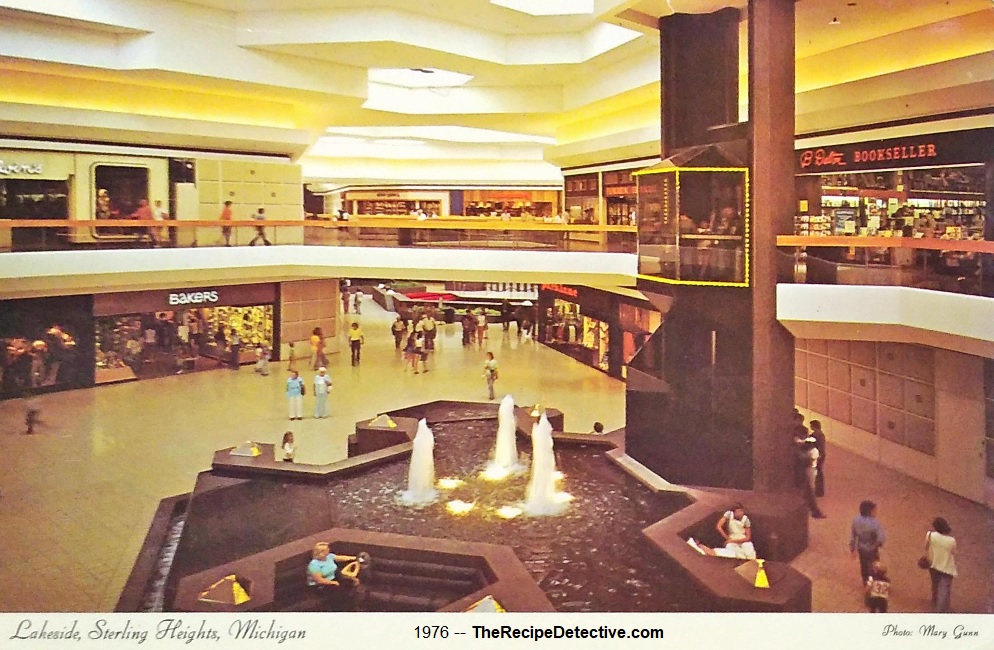 According to DepartmentStoreHistory.net, “The three biggest department stores in the mid-1960s, both in sales volume and physical size, were Macy’s, Hudson’s, and Marshall Field, in that order.” It’s no wonder they were commonly used for mall anchors nationwide.

Austrian architect, Victor Gruen, designed the first fully enclosed, American mall. The Southdale Center, in the Minneapolis suburb of Edina, Minnesota, opened in 1956. Most of the smaller storefronts faced inward, while large “anchor” stores (i.e. JC Penny’s, Macy’s, Sears and others) were placed at each end, attracting shoppers and creating foot traffic to the smaller stores in between.

Inside the mall, Gruen created a European-style central court area with an aviary, sculptures, and an open-air-style café. The mall was an island, surrounded by a sea of parking places designed to accommodate the masses. It was also designed to provide local employment and economic growth to the area.

By 1960, there were 4,500 malls nationwide. They were built to house dozens (even hundreds) of retail stores and restaurants in one conglomeration. They were envisioned for the middle-class consumers’ socializing and shopping conveniences. Even in ancient Greece, societies tended to congregate in central marketplaces.

To make the mimeograph pay for itself, I even printed up my own business cards on it, using dime-store construction paper and then cutting the cards apart with scissors until I had neat little stacks of about 50 and a total of 200 or 300 cards. These I distributed at the mall whenever and wherever we might be in one. Paul did not know I was doing this, at first, either, or he would’ve disapproved.

It was unprofessional and risky, but I thought anything was worth a try and what I could do ‘quietly’ until I could prove it was either a mistake or a benefit, would have to be my little secret. Well, actually, the kids were a part of that secret too.

I had heard an interview on TV or radio with ‘the world’s most successful salesman’, who was a Chevrolet salesman in Detroit and who believed heartily in business cards, placing them everywhere and anywhere that it was allowed.

From his story, I found it was easy to drop my card into the pocket of a bathrobe in the ladies’ wear [areas] in the department stores and in the purses and tote bags, on public phone booth stands, [in] restaurant restrooms, even in cookbooks in the bookstores. From these, you’d be surprised, we DID hear from people who wanted to know about my recipes, which was the first experience I had with public response. 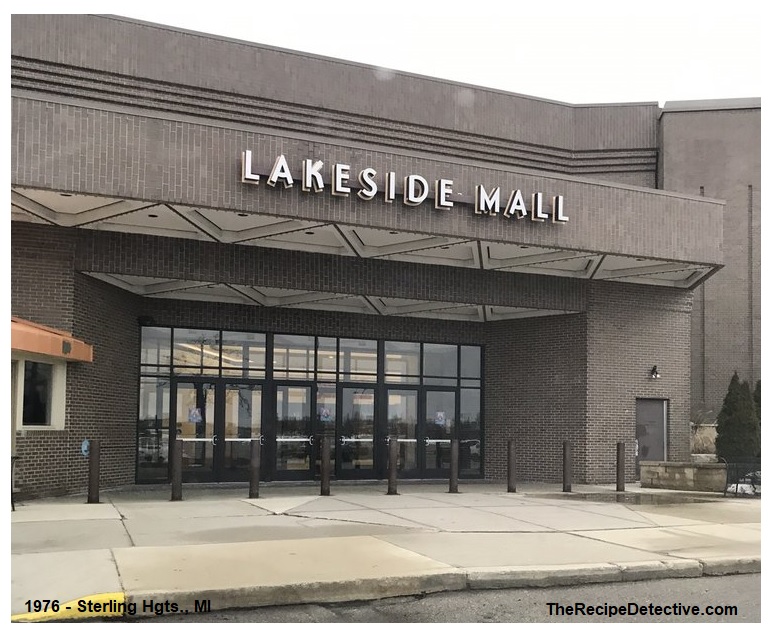 By the 1980s, American malls were thriving, out-shining “Main Street”, and taking over pop culture. But, like other rising sensations, this one wasn’t going to last either. Between the rise of online shopping and the setback of the recession in 2008, there was a significant drop in sales and foot traffic at big-brand retailers and malls, alike.

Around 2010, consumers began turning in larger numbers to Amazon and other online retailers. The steep, nationwide drop in sales for brick-and-mortar stores has been accelerating in recent years, but the pandemic put their decline into overdrive.

The entire district has been devastated as consumers have lost the habit of shopping and browsing in person, while the Covid-19 pandemic and related shut-downs have just about hammered the last nails in the shopping mall’s coffin. Except that people are itching to get out again, making it appear that malls are being resurrected. But stores are still struggling, and malls are not as full as they used to be.

According to The Week’s staff article, The ‘Retail Apocalypse’ (Aug. 7, 2021), “Roughly 40 percent of the nation’s department stores have closed since 2016, including every Lord & Taylor store and nearly all Sears and Kmart stores. Neiman Marcus and J.C. Penney have filed for bankruptcy; Macy’s has shuttered dozens of stores and will close 125 more by 2023.” 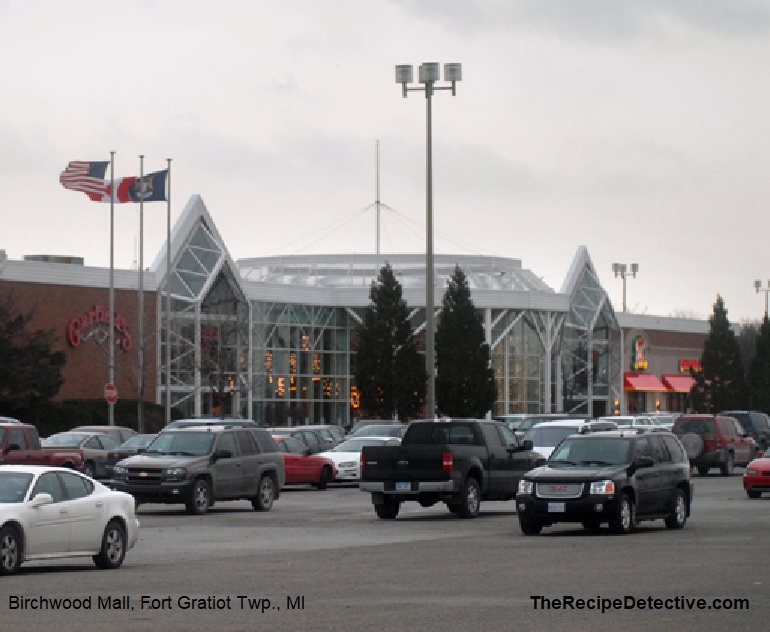 Because of the internet, the way people socialize has also evolved, just like their shopping customs. For many decades, malls were more than just shopping and dining hubs. They were the new public squares and market places for social gatherings of average, middle-class Americans.

I think malls are memory-makers! I remember when Lakeside Mall opened in 1976 in Sterling Heights (MI). Mom took me and my sisters there on the weekends to shop and eat, as well as help her advertise her newsletter and cookbooks – a story I’ve mentioned in some of my other blog posts.

It was so exciting to ride up and down in the glass elevator that overlooked the beautiful, 3-sided, waterfall fountain. I loved getting to toss a coin into the fountain and making a wish. I remember getting my ears pierced, there, for my 12th birthday, too!

I also remember taking my own children to the “new” Birchwood Mall, in Fort Gratiot Twp. (MI) in the 1990s, for entertainment. We had play-dates and lunched near the carousel. Sometimes we went to the movies or did some shopping. We usually got our annual family pictures taken at one of its anchor stores, like Sears or JC Penny’s, to include in our Christmas cards for family members and close friends.

YOU’VE MADE A FRIEND

A SMILE IS the universal, unspoken language between us. Some people smile more easily than others, but a smile is as good as a hug. I just LOVE people who smile a lot! Even when I’m shopping or [when Paul and I are] walking around the campgrounds on one of our abbreviated ‘get-aways’ with our motorhome, I find myself smiling at people I have never seen before, and they smile back. It’s contagious!

People don’t smile as much as they should! I’ve noticed lately how seldom strangers smile at each other in shopping centers and restaurants and other places where average folks mingle or pass. It occurred to me that there was nothing to lose by smiling and nodding at people as I shopped or glanced across a restaurant to other tables.

A surprising thing happened! Grim looking faces spontaneously responded with smiles and nods, as if they were trying to place me or recall where we might have met before. It was just wonderful! 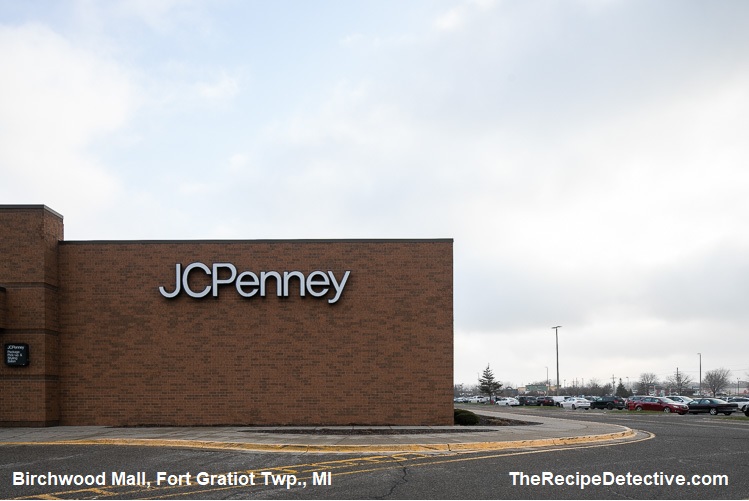 These days, everything – even socializing – is being done online more than in person, just like shopping. Unfortunately, for the brick-and-mortar retailers, the ease and expediency of online shopping caught on quicker than anyone anticipated, increasing its popularity considerably over that of hands-on, in-person shopping.

Josh Sanburn wrote in his article, ‘Why the Death of Malls Is About More Than Shopping’ (July 20, 2017), “Malls were designed for leisure, abundance, ambling. You parked and planned to spend some time. Today, much of that time has been given over to busier lives and second jobs and apps that let you swipe right instead of haunt the food court.” 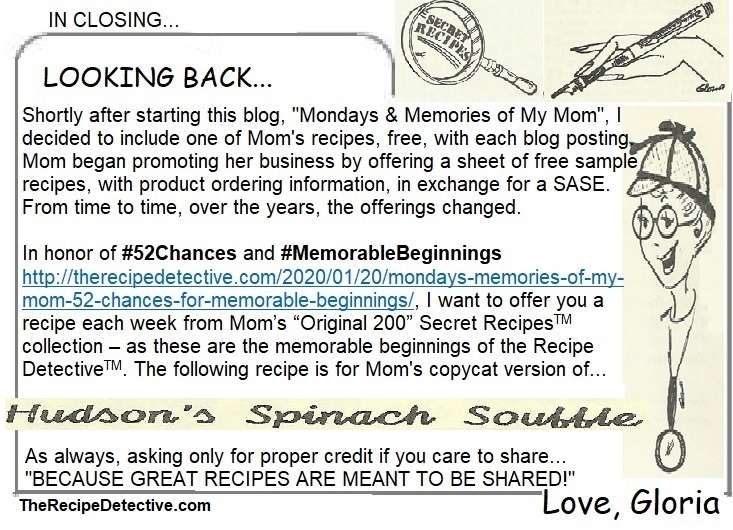 Since department store and mall eateries are just another niche in the vast food industry from which Mom found inspiration in imitating “famous foods from famous places” and since this is still Spinach and Squash Month, here is Mom’s copycat recipe for imitating Hudson’s Spinach Pie; as seen in her cookbook… The Original 200 Plus Secret RecipesTM Book (Secret RecipesTM, St. Clair, MI; June 1997, p. 17).

Yesterday was the start of Chanukah – which lasts for eight days and changes annually (November 28th for  2021)!

December 1st is also… National Eat a Red Apple Day, Day With(out) Art Day, Rosa Parks Day, and National Package Protection Day (which is always the Wednesday after Thanksgiving)! Plus, it’s the first day of Operation Santa Paws (which always runs the 1st through the 24th)! In honor of Wednesday, also being National Pie Day, here’s a re-share of Mom’s imitation of Aunt Jenny’s Pumpkin Pie, from her “Original 200” recipes collection. 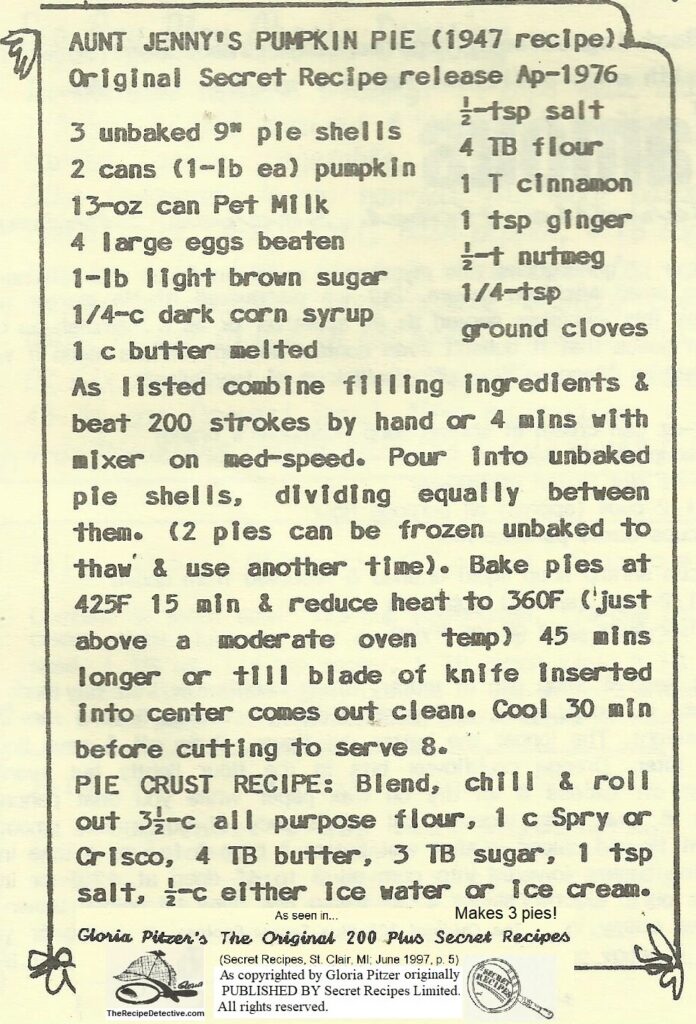 December 3rd is… National Roof Over Your Head Day! Plus, as the first Friday in December, it’s also… Faux Fur Friday and National Bartender Day!

December 4th is… National Dice Day, National Sock Day, and National Rhubarb Vodka Day (which is always the first Saturday in December)! Plus, as the first Saturday of the month, it’s also… National Play Outside Day! Plus, in honor of Saturday, also being National Cookie Day, here’s a re-share of Mom’s imitation of Wally Amos’ famous cookies; which appeared on her “Free Recipes/Information” sheets that she used to give out in exchange for a self-addressed, stamped envelope. 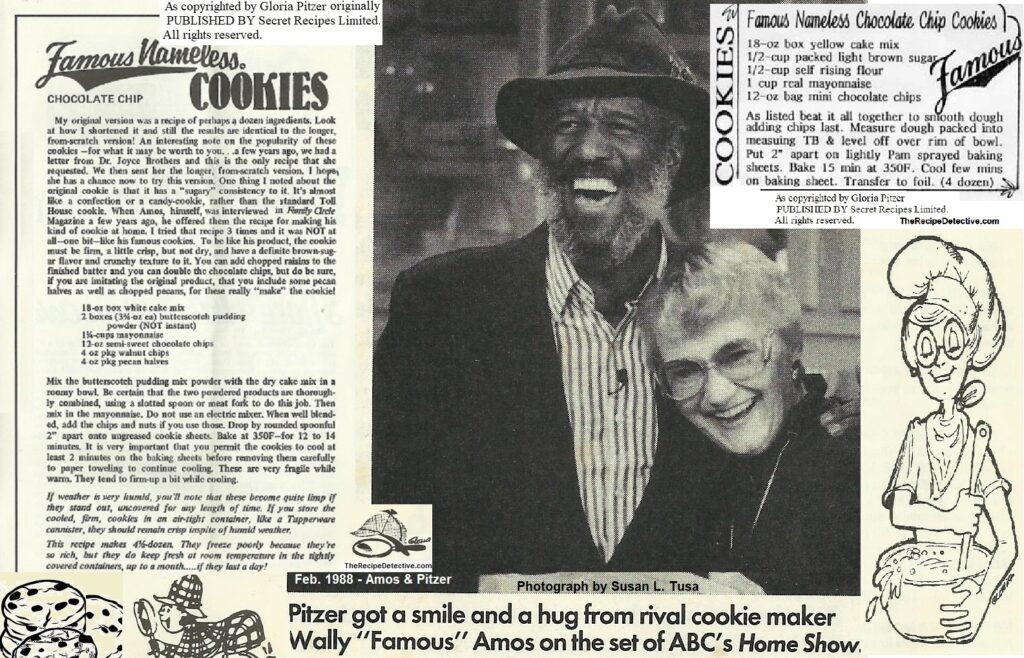 Sunday is… National Sacher Torte Day! Plus, as the beginning of the first week of the month, it’s also the start of… National Cookie Cutter Week!