Happy Monday and welcome, again, to Mondays & Memories of My Mom, a blog series I started last year to honor my mom’s legacy.

I’m Laura Emerich and my mom is Gloria Pitzer, aka the famous “Recipe Detective”TM, investigator of the food industry’s “Secret Recipes”TM. Starting in the early 1970s, Mom was the pioneer of imitating the food industry’s favorite fine-dining dishes, as well as fast food, junk food and grocery products at home! She carved out the original niche in copycat recipes movement. Mom also created the slogan, “eating out at home”, which became the title of one of her more than 40 self-published books in a 28-year span, from 1973 through 2001. You can find more information on most of her publishings by clicking on the “Cookbooks”  and “Other Publications”  tabs on this website. I’m still updating the “Other Publications” tab as I find more of Mom’s syndicated work from the 1960s and 1970s era. 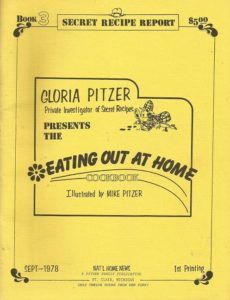 Mom’s books were all quite unique and special. She built most of her cookbooks on the taboo subject of embracing fast food and junk food, while all the critics were saying to stay away from it and how bad all of it was for our health. Well, maybe so, but as Robert Redford once said, “Health food may raise my consciousness, but Oreos taste better!” – a quote that Mom noted on the first page of her September 1978 cookbook, Eating Out at Home.  [Note: See the “Recipes” tab on this website (another tab to which I’m working on adding more) for Mom’s copycat version of Oreo-Style sandwich cookies, which she calls “Gloreo’s”.] Opposed to those critics, Mom’s definition for junk food was “poorly prepared food”.

People know what they like, and Mom found a way to “have your cake and eat it too!” Mom claimed to be able to take the junk out of junk food by making it at home, where you can control the ingredients. It was a break through that had many companies, like Hostess, up in arms – that someone could possibly duplicate their product at home and, then, share it with the public! However, Mom never knew what the companies’ actual “secret recipes” were for their sumptuous products, as she wrote on page 2 of her Eating Out at Home cookbook…

You don’t have to know exactly how the original dish was prepared by the commercial food chains. All you need is a basic recipe to which you will add that ‘special seasoning’ or that ‘secret method of preparation’ that sets one famous secret recipe apart from those similar to it…

The most remarkable part of the duplication of famous recipes is that you can accept the challenge to ‘try’ to match their [dish or product]. Sometimes, you will be successful. Sometimes you will fail in the attempt. But, at least, it can be done [‘practice makes perfect’], and it certainly takes the monotony out of mealtime when, for reasons of financial inadequacy, we can not always eat out…even if we could afford to eat at all or most of our meals away from home, wouldn’t that become monotonous in time?

Mom found out decades later, in her and Dad’s retirement years, without 5 kids in tow and being able to afford it from the success of their “Secret Recipes”TM business, that eating out all the time did not get as monotonous for them as she thought it might! They enjoyed, at least, breakfast and lunch out almost every day and they made friends everywhere they went too!

Given that Dad was diabetic, they were always conscious of the choices they rendered – from the places where they chose to dine to the menu selections and portion sizes they made. They even afforded themselves the occasional fast food breakfast sandwich once in a while – everything in moderation. As Mom also wrote on the same page as the excerpt above:

STOP CHEATING YOURSELF of the pleasure of good food. Eat what you enjoy, but DON’T OVER eat…This is what really causes the problems of obesity and bad health – rather than believing the propaganda of the experts that ‘fast food’ is ‘junk food’…It is not! Poorly prepared food, whether it is from a fast-service restaurant or a [$20-plate in a] gourmet dining room, is ‘junk’, no matter how you look at it…if it is not properly prepared.

Junk is in the eye of the beholder…as Mom also wrote about in the following excerpt from page 3 of her Eating Out at Home cookbook, for imitating a cake similar to that of Hostess Twinkies:

TO DEBUNK THE JUNK…don’t think of Hostess Twinkies as junk dessert but, rather, the very same cake ingredients prepared in the Waldorf Astoria kitchens as the basis for their “Flaming Cherries Supreme”. All we did [to imitate the product] was shape the cake differently, adding a little body to the filling and putting it INSIDE the cake, rather than on top as the Waldorf did!

The critics who contend that ‘fast foods’ are ‘junk foods’ and not good for us, have probably never prepared these foods themselves. Certainly, they have no access to the closely guarded recipes from the food companies that created these dishes, as there are only a few people in each operation that are permitted the privilege of such information! So, 99% of the critics’ speculations are based on their own opinions… ‘Fast foods’ are not ‘junk foods’ unless they’re not properly prepared. Any food that is poorly prepared (and just as badly presented) is junk!

Unfortunately, ‘fast food’ has carried a reputation, by default, of containing ingredients that are ‘harmful’ to us. Yet, they contain the same ingredients as those foods served in the ‘fine’ restaurants with wine stewards, linen table cloths, candlelight, coat-check attendants and parking valets; which separate the plastic palaces of ‘fast food’ from the expensive dining establishments. One ‘eats’ at McDonald’s, but ‘dines’ at ‘The Four Seasons’. Steak and potato or hamburger and French fries – the ingredients are practically the same. How they are prepared makes the difference!…

James Dewar started out driving a horse-drawn wagon in Chicago and, by 1930, was manager of the Continental Baking Company’s Chicago establishment. He invented “The Twinkie’, a sponge-type cake with creamy vanilla-flavored filling [in the early 30s.] It has been called the “Grand-daddy’ of modern snack foods. Today, the finger-sized cream-filled cake is as big a confectionery sensation as they were when Dewar first introduced his creation to American cuisine. The company that put out the Twinkie was originally called the Continental Baking Company and later became the Hostess company.

At the time, he wanted to give the public something reasonably priced, for the Great Depression of the 30s brought grave times to this country. Treats like the cream-filled Twinkies, would be a luxury to people who couldn’t afford otherwise. For decades, the appealing factor about the Twinkies national popularity has been that it is affordable! Dewar put 2 cakes in each package, selling them for $.05 a pair. For the price of a nickel, it was quite a bargain. Dewar remembered how the Continental Baking Company was selling small finger-sized shortcakes for strawberry season in the 1930s. The pans they used to bake them in were not being used except for the spring promotion to produce the shortcakes. He, therefore, came up with the idea of preparing the same shortcake in those pans, but filling each cake with an injection of vanilla cream. The Twinkies became an immediate success! The idea for the name, on the other hand, came while he was on a business trip to St. Louis and saw a billboard advertising “Twinkle Toes Shoes’, which was, then, a terrific sales pitch. The name “Twinkies’ was a spinoff of that shoe advertisement. From then on, the cakes took off. When Dewar retired from Continental in 1968, he boasted often to the press that he ate scores of Twinkies every day. That’s not a bad endorsement for the critics who claim junk food will shorten your life span.

Mom has always tried to encourage the inner cook in all of us, through her many publishings. Even if you didn’t think you could cook at all, Mom could make you feel like a gourmet, making your own creations and bringing joy back into eating at home. Additionally, without publishing any pictures in her cookbooks or newsletters, Mom could, very-well, describe in detail how the product should look throughout the various stages of the recipes; so that you knew or not if your duplication was coming along properly. Her recipes are always fun and easy to follow. She also made them simple to “customize”, to suit your own diet needs.

Mom’s original concepts of “eating out at home” and “taking the junk out of junk food” has brought so much joy to so many people who couldn’t afford such “luxuries” as eating out, even fast food, or buying junk food; either for monetary or health reasons. Mom gained a lot of followers in the copycat movement (also some plagiarists) since she started the concept in the early 1970s.

Also, searching Amazon for “Gloria Pitzer” brought me 63 results of people reselling her old cookbooks that are no longer in print; as well as others who are getting her last cookbook, Gloria Pitzer’s Cookbook – The Best of the Recipe Detective (January 2018) from the publisher, Balboa Press, and reselling them on Amazon. There are also many wonderful comments about my mom and her unique cookbooks to be found on many of these results!

Put all spices (except last 6 ingredients) through blender until it’s a fine powder. Place over low heat with half vinegar and simmer 1 hour; adding rest of vinegar a little at a time as mixture is reduced in bulk. Stir in tabasco, wines and kitchen bouquet. Cook 3 min. to dissolve. Remove from heat. Pour into crock or Tupperware container (2qt) and let stand covered for 1 week. Then strain through cheese-cloth, six times. Bottle and cap tightly. Keep refrigerated indefinitely. Freeze to keep for years. 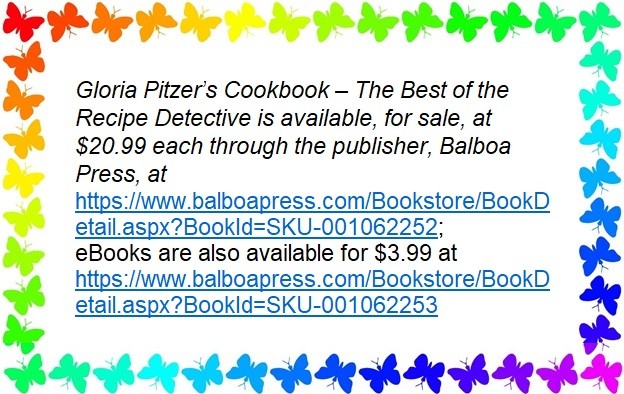