Thank God Its Monday again. As such, #HappyMonday to one and all! I personally look forward to every Monday because they’re my 52 Chances a year, in which I get to share Memories of My Mom with you!

Saturday will be National Radio Day! Thus, let me tell you again about how radio helped Mom grow her business. Even though she was on several major talk shows throughout her first 20 years in business, Mom enjoyed her radio interviews the most.

As I wrote about in my very first blog post, A Legacy Of Love (TheRecipeDetective.com; Sept. 17, 2018), and many thereafter, Mom was a pioneer in the 1970’s, discovering how to imitate our favorite restaurant dishes at home, writing her own recipes and marketing her “copycat cookery” talents in newspapers and magazines; as well as on local, national, and international television and radio talk shows.

For nearly 40 years, Mom was a regular guest on radio talk shows, world-wide. Mom’s local favorites were “Ask Your Neighbor”, hosted by the late Bob Allison, on WWJ-Radio in the Metro-Detroit area; and “Listen to the Mrs.”, hosted by Art Lewis, on WSGW-Radio in Saginaw. Mom and Dad, both, had notable friendships with both of these Michigan radio legends, for decades.

Mom was a regular weekly guest on a lot of radio shows – mostly by phone, from the comfort of home. In fact, it was by the “listeners” of her regular radio visits with Bob Allison that Mom was initially titled ‘The Recipe Detective’. She further developed that into her own ‘Secret Recipe Detective’ trademarked identity, which would probably be similar to a modern day, digital avatar. 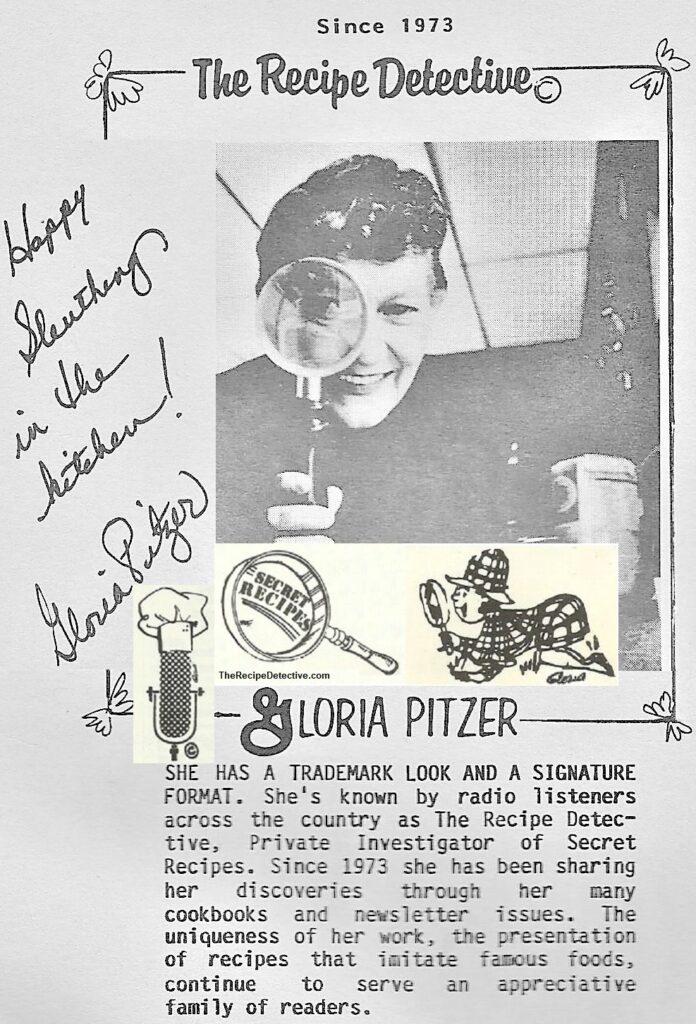 I didn’t know I had what is considered ‘a radio voice’. Heaven knows our five kids will, to this day, even in their adulthood, testify to the fact that, on occasion, during their up-bringing, I had been known to discover conditions that would prompt me to accelerate, vocally, in a pitch that only dogs in the next county could here!

My introduction to radio began with Bob Allison and [the] ‘Ask Your Neighbor’ show. I was folding diapers at the kitchen table, waiting for my favorite daily segment of ‘My True Story’ to come on the air when, instead, WWJ [a Detroit area radio station] announced that it had been replaced with a NEW show.

When ‘My True Story’ was replaced by Bob Allison and his ‘Ask Your Neighbor’ show… I was, at first, very disappointed. Household hints and problems around the house that you cannot solve yourself seemed like just too much homemaking information to please me.

I soon, however, became ‘hooked’ on the show, as almost everybody does, to the point that, on Fridays, when Bob would sign off and say he would talk to us again on Monday, I was spending the weekends just looking forward to the show on Monday.

I called the show about 2 or 3 times a month for the first year or two, to ask questions of Bob’s “neighbors” that my newspaper column readers were asking me. When I couldn’t find the answer from consulting other sources, I knew I could rely on Bob Allison’s ‘neighbors’ to come up with the right answers for me. 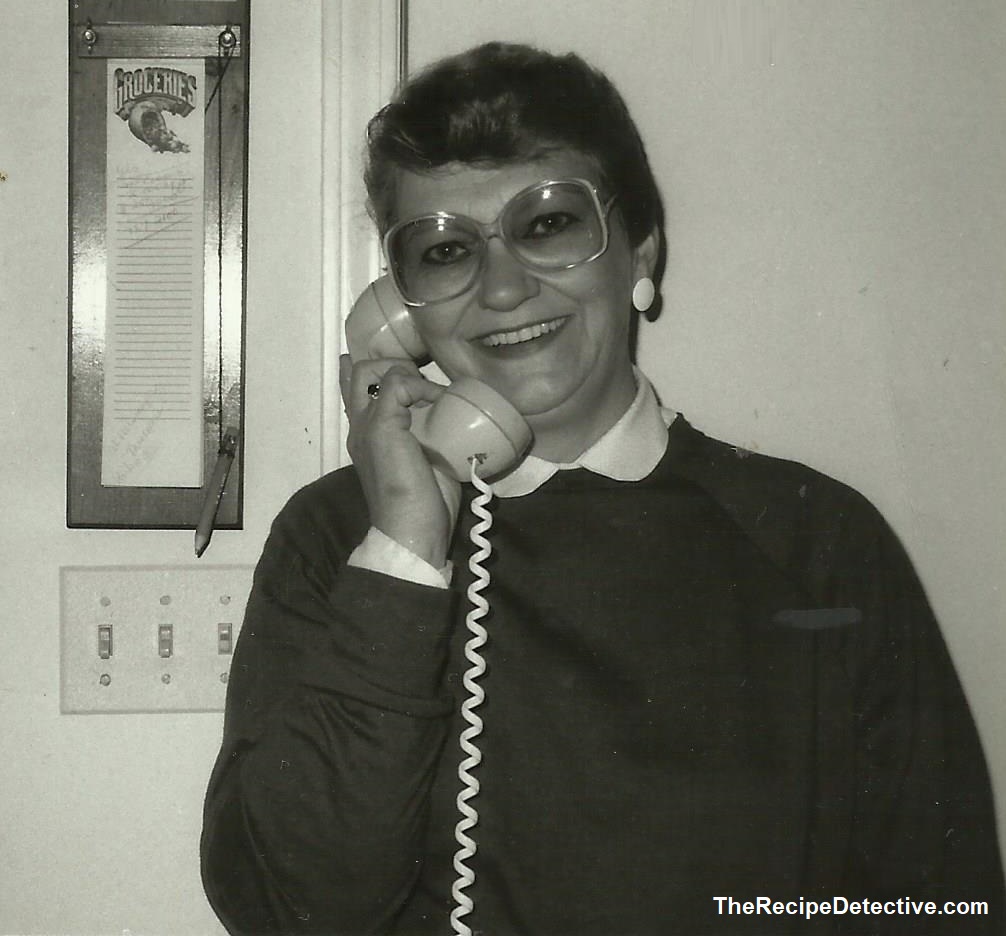 In return, I would often… phone in an answer that I occasionally had in reply to one of their questions or recipe requests. Bob did not recognize my voice as a regular caller until I had initiated the newsletter, however.

He asked me where the [hamburger sauce] recipe came from that I was giving, in reply to one of his listener’s requests, which is how his program has always worked… In mentioning that the hamburger sauce recipe would appear in the next issue of my monthly newsletter… Bob reacted with great interest and curiosity.

‘You have a newsletter, do you?’ He asked. ‘Well, tell us about it and how much it is and where our neighbors can get it.’ That was all it took to get us well-acquainted with Bob’s ‘neighbors’ and, in no time at all, our subscription orders went from a few to many.

Mom was always grateful for her “readers”, “listeners”, and “fans” – all those who kept her endlessly inspired by their requests to find the “secrets” for making their favorite dishes or grocery products at home (and at less cost).

She was also very grateful to all the media sources (newspapers and magazines, as well as radio and TV talk shows) that interviewed, wrote and talked about her unique imprint on the food industry, especially in the “fast food” and “junk food” divisions.

WE EMBRACE THE CHALLENGE to inspire…The care and concern that an author has for their readers is part of the pleasure of presenting interesting ideas in either an entertaining way or in an informative way. I try to balance my own presentations between the two.

When I am broadcasting over the numerous radio stations around the country, sometimes around the world, I try to lift the listener to a new height of interest and enthusiasm, and I leave the serious side of nutrition to the experts, who have the medical background to support their claims.

My hope is to present my recipes in such a way that cooking is a joy and never a job! I try to present these recipes with the same concern as I do giving a gift to a special friend. Each of our 5 children, who have grown up helping Paul and me with these recipes, have gone out into the world with this legacy of love and enthusiasm. We can only hope that they use what we have given them.

Mom often wrote about her radio visits in her numerous books and newsletters. On one of the very first pages of her last book, Gloria Pitzer’s Cookbook – The Best of the Recipe Detective (Balboa Press, Jan. 2018), is a “thank you list” she originally printed in 1982, dedicated to radio stations, talk show hosts, and others with whom Mom worked.

They all significantly contributed to the success of her first decade, as Secret Recipes DetectiveTM. Incidentally, Mom’s relationships with radio talk shows and their hosts went on for over 32 more years, until she had to fully give up working for health reasons in 2014. Nonetheless, like family, she kept in touch with many of them; even after her “retirement”.

Hi, Neighbor! (June 3, 2019) is the name of my blog post that’s another BIG “thank you” note to Mom’s radio, newspaper and TV contacts who helped her to grow her Secret RecipesTM business. I also created a “Media Friends” tab on the website, based on that blog post. 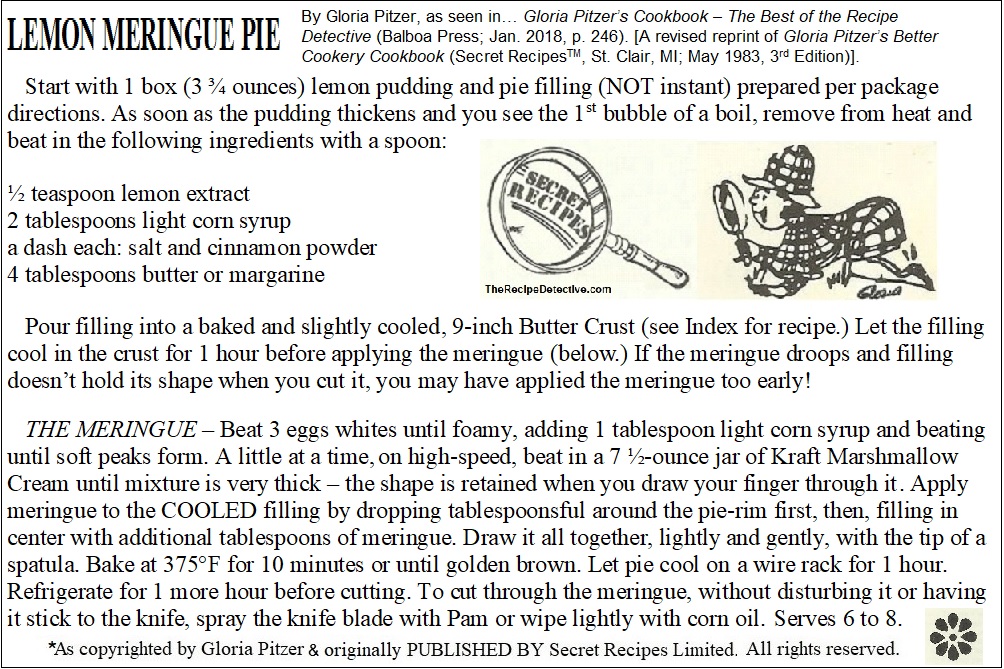 Other celebrations happening this week include… Elvis Week, which is always the week of August 16th!