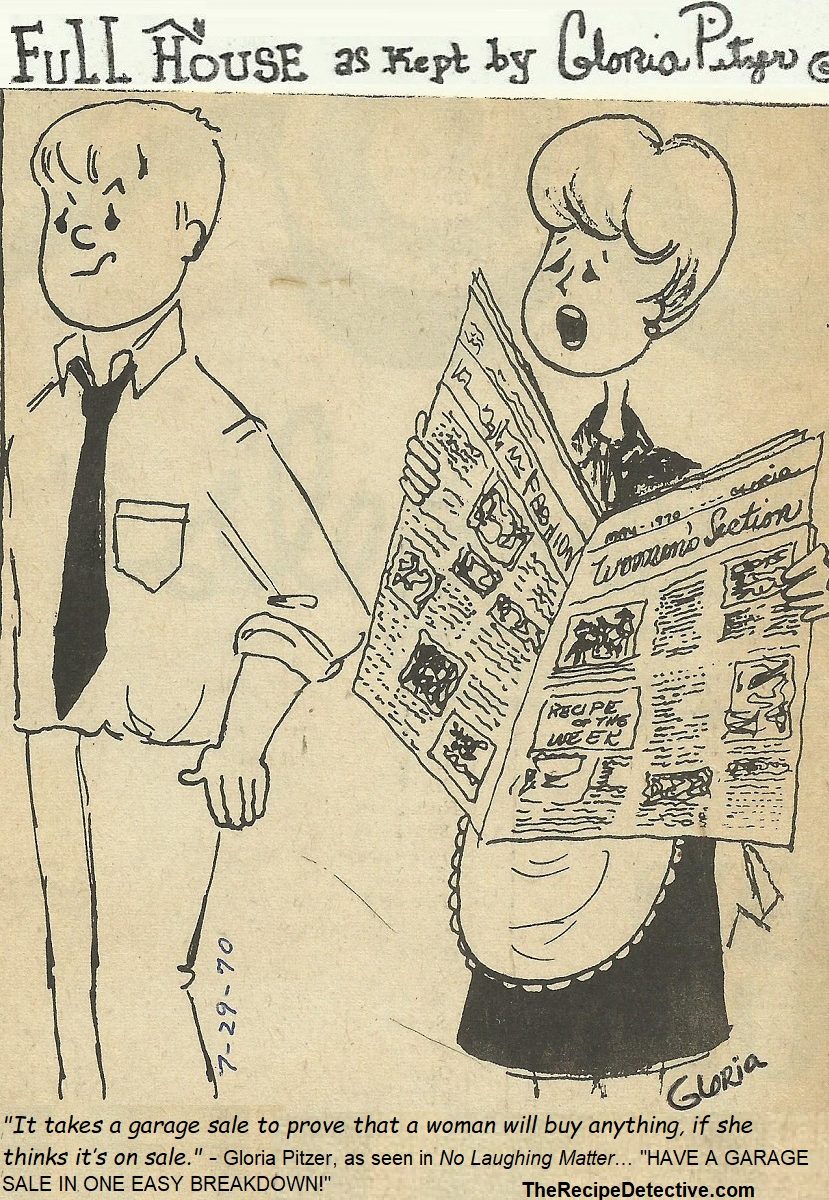 Happy Monday and happy National Bargain Hunting Week – I think! Regardless, it’s Monday, so celebrate! I always look forward to Mondays because they are my 52 Chances each year, in which I get to share Memories of My Mom with all of you!

As I wrote about, near the end of last week’s blog post, NationalDayCalendar.com claims that this week, being the SECOND week in August, celebrates National Bargain Hunting Week. However, BargainHunting.webs.com, says that the week is observed on the first Monday through Sunday of August.

Nevertheless, both websites agree that it began in 1996, founded by Debbie Keri-Brown, author of “Bargain Hunting” books. I say, “Why not celebrate it both weeks?” Now there’s a bargain – TWO FOR ONE! Whichever week it is, happiness happens for me every time I find a good bargain!

Although BargainHunting.webs.com says it’s supposed to run concurrent with National Smile Week (founded by Heloise of Hints by Heloise). However, I couldn’t find “National Smile WEEK” through Google. I did, however, find that National Smile DAY is observed on May 31st and there’s a National Smile MONTH celebrated in the UK mid-May to mid-June. 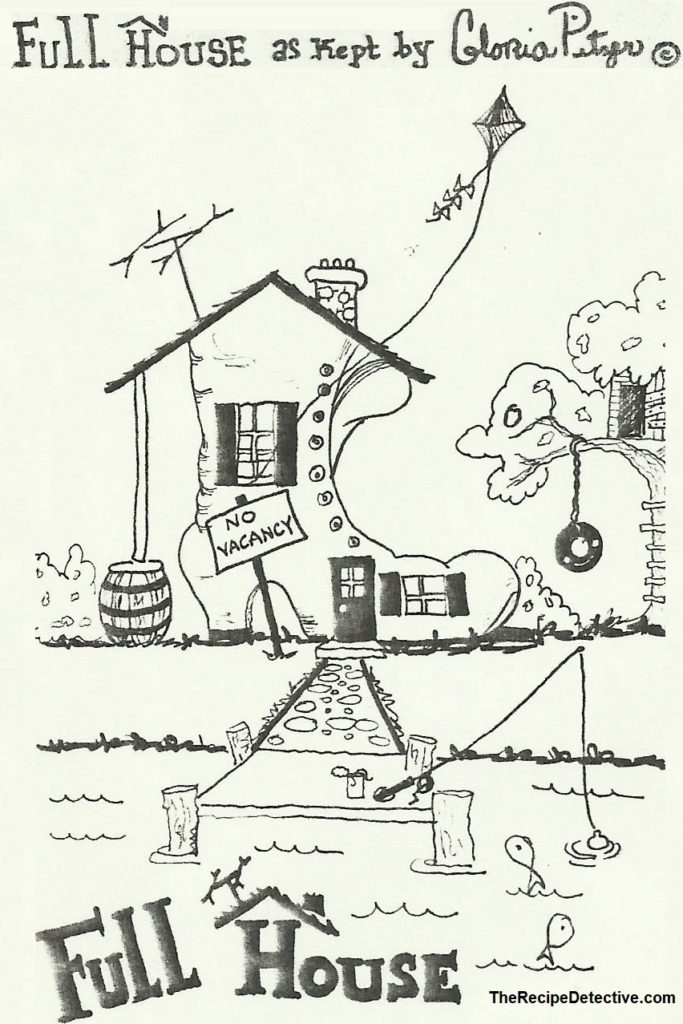 As seen in her syndicated column, No Laughing Matter…

HAVE A GARAGE SALE IN ONE EASY BREAKDOWN!

Until you’ve had a garage sale, you just don’t know what you’re missing. I’ve just had one and I know! I’m missing three garbage cans, my husband’s workbench, a swing set, four lawn chairs and our station wagon. Actually, those items weren’t for sale, but you can’t refuse a good price when it’s offered to you.

All I really wanted to sell was a few odds-and-ends like seven dozen Ruby Bee Jelly glasses, a Coke bottle mosaic of my mother-in-law, a transistor radio guaranteed to crack plaster when operated by a teenager, an illustrated guide book to Disneyland and my husband’s bowling ball.

Of course, if the truth were known, I just had to do something about the closets before we were cited for contempt by the Pollution Control Commission. The kids were cleaning out their rooms and dragging out microscopes that had only examined curdled milk. 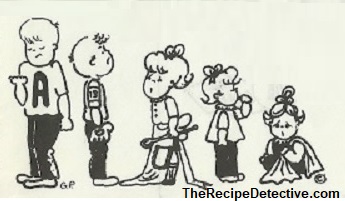 There was an electric train with which only their father had played, a guitar that never played a tune (but made a neat tennis racket), socks that scratched and even their old report cards. But, I drew the line when it came to selling their toothbrushes and underwear. I mean, a person has to be reasonable about these things!

I had heard that garage sales were successful, but I didn’t believe it until I saw 23 cars double-parked in our drainage ditch, a pick-up truck on the back porch and a dune buggy in the furnace room! It takes a garage sale to prove that a woman will buy anything, if she thinks it’s on sale.

After all, what can one do with a dead philodendron plant – a plastic one, yet? I also learned that there’s no exercise so efficacious for the upper arms as standing in the midst of a group of mad women and trying to keep them from taking the rafters apart while trying to get at our storm windows (which I’ll have you know were NOT for sale) but little did they care. 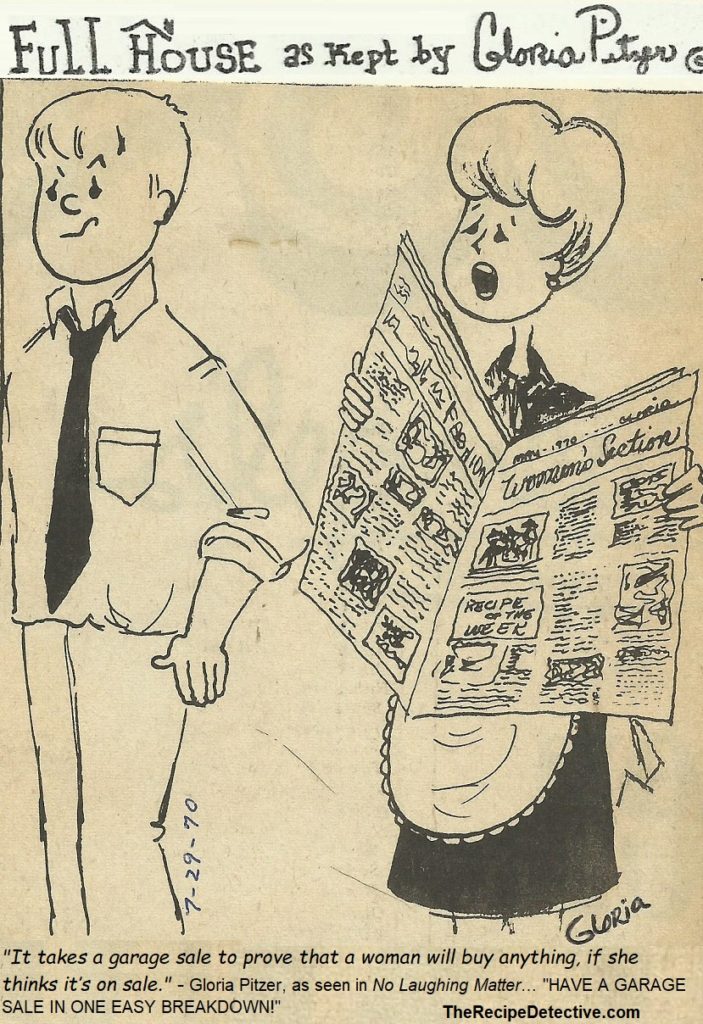 One woman offered me a dollar for the dress I was wearing, and I had to run half a block to catch up with the lady who gave my son 50 cents for the sheets on the clothes lines. Did she care it was my laundry and I had to make the beds before the day was over – and where would I be without those sheets?

I finally had to administer first aid to the two girls who fought so bitterly over which of them was going to drag off to their car a plaid CPO jacket and a pair of blue worsted men’s slacks! Mind you. I wouldn’t have cared under any other circumstances, but my husband was still in them AND he didn’t want to go with either of them. He wanted to stay home and watch the ball game on TV!

By 6pm, they had bought everything that wasn’t breathing, barking or encased in concrete. As I sat at the kitchen table, counting up the profits of the day, my husband came staggering in, bruised and breathless. ‘You know that guy with the flat-bed truck, who’s been hanging around all day?’ [He asked.] ‘Well, he just gave me $50 and drove off with our garage!’

It all goes to prove, if I had put a price on those kids of ours, I might have sold them – but, who could afford to feed them once they got them home? 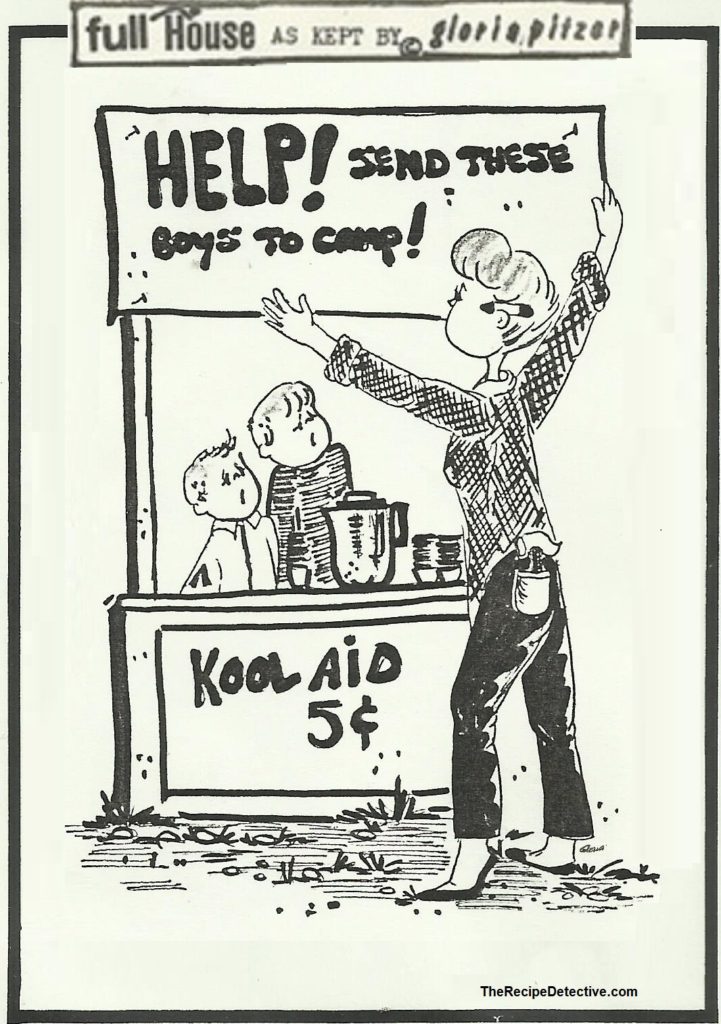 The “Thumb Area” of Michigan has held a massive, annual event on the second weekend in August since 2012 (except for 2020, of course). It’s called the Antiques Yard Sale Trail. “The trail” is over 150 miles long, involving more than 11 communities, from Sebewaing on M-25, near the southeast end of Saginaw Bay, wrapping all the way around Michigan’s “Thumb Coast”, to New Baltimore on M-29, by the north shore of Lake St. Clair.

Some years, I shop different parts of “the trail” and other years, I host my own yard sale. I’m only less than a mile from where “the trail” passes through my hometown. I’ve found, over the years, that advertising wisely will draw many “bargain hunters” at least a little way off “the trail”.

Earlier this year, in Spring Has Sprung! (Mar. 22, 2021), I wrote about my spring cleaning, purging, and getting ready for a new yard sale. I’m still waiting for a work-free, rain-free weekend (to have one) that isn’t already reserved for other plans, like a few weekend vacations, a class reunion, a birthday party, a shower, and a wedding. 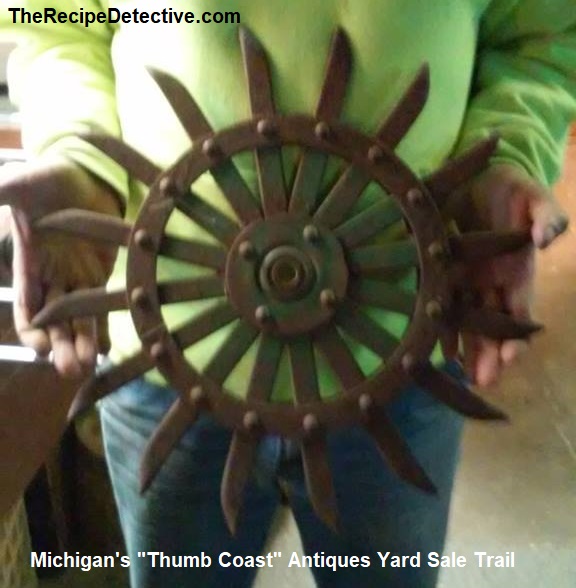 Mondays & Memories of My Mom…

…HOSTING A YARD SALE IS A LOT OF WORK! I WISH I HAD A GARAGE!

A garage would be a lot easier in which to set up. First of all, it’s a permanent, solid, enclosed, and protected area. If I had a garage, I could set up my tables and clothes racks at any time, putting our stuff out a little bit each night as I clean out different rooms of the house and barn.

As it is, I have to set it all up in one or two days, right before my sale starts, because it’s under two large tents, which is somewhat open to the elements. Additionally, my city’s ordinances limit how long temporary structures, like my tents, can be up (and other things related to yard sales). 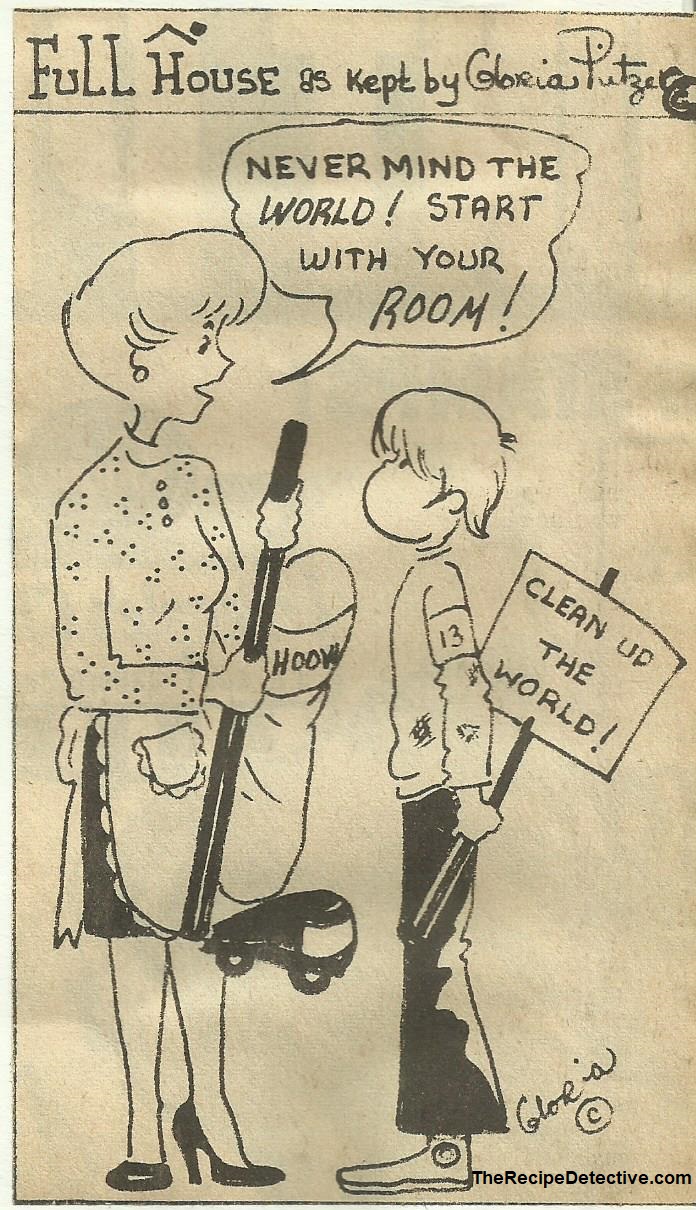 I usually don’t plan a specific yard sale date until a few conditions are met. First, I need enough of “other peoples’ treasures” to sell, because a lot of people won’t even stop at a sale that only has a small table with a few things on it. Then I need to have a Wednesday through Sunday free of time, to set it up, work it and tear it down. Plus, the weather forecast needs to be somewhat favorable since I don’t have a garage to protect everything from the elements.

Michigan weather changes often. Thus, since I don’t have a garage, I use two large, screened tents for at least some protection. Set up side-by-side, they offer me 440 square-feet of covered space – close to the size of a two-car garage.

Since I’m OCD, I need a full day just to set these up, along with all of my tables and clothes racks. After that I can bring out all the boxes of stuff that I’ve cleaned out of closets, cupboards, the basement, and barn. Then I set up my “store”. I like to make my yard sales “worth stopping and shopping” – maybe because of all my years of working in retail.

I set up my yard sale by “departments”. Each table/area represents a different department. Clothes, shoes and other related accessories (which are all grouped by sizes and type) are in one area. Rugs, furniture, and décor are in another area. Small kitchen appliances and gadgets are in another area. Other “departments” include pet stuff, bed and bath things, hardware and tools, sporting goods, yard and garden items, books and school/office supplies, electronics, auto accessories and so on. 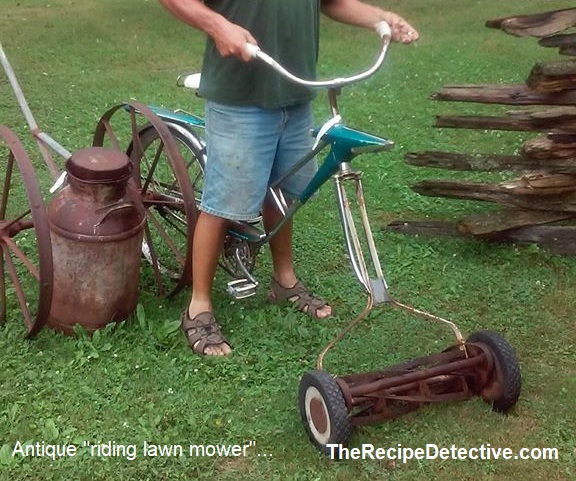 To save time, instead of pricing everything individually, I use descriptive, pricing posters – for example “All Clothes $1 Per Piece”, “All Paperback Books 25₵ Each”. I avoid using “Everything on this table is $’X’…” signs because things get moved around by shoppers all the time.

I receive many compliments on how my yard sales are set-up and organized. I also tend to sell a lot of stuff because, while I price it to sell, I’m willing to barter. I don’t put it all out there just to haul it all back inside or take it to a resale shop just to squeeze out every penny I can from “junk” that may/ may not be someone else’s “treasure”. I look at everything as if I was purchasing it at someone else’s yard sale, asking, “What would I pay for that?” But I’m frugal and I love bargains!

With the Antiques Yard Sale Trail happening this coming weekend and, so far, criteria has not been favorable for me to have my own yard sale; I guess I’ll be bargain hunting, instead of bargain selling this week. Enjoy your week – find a bargain – celebrate Garage Sale Day, especially on Saturday – AND post your treasures on social media with #BargainHuntingWeek and/or #NationalGarageSaleDay!

In honor of August, also being National Brownies at Brunch Month AND National Back to School Month, here is Mom’s secret recipe for Lunchbox Brownies With Fudge Cake Icing; as seen in… Gloria Pitzer’s Cookbook – The Best of the Recipe Detective (Balboa Press; Jan. 2018, p. 207) 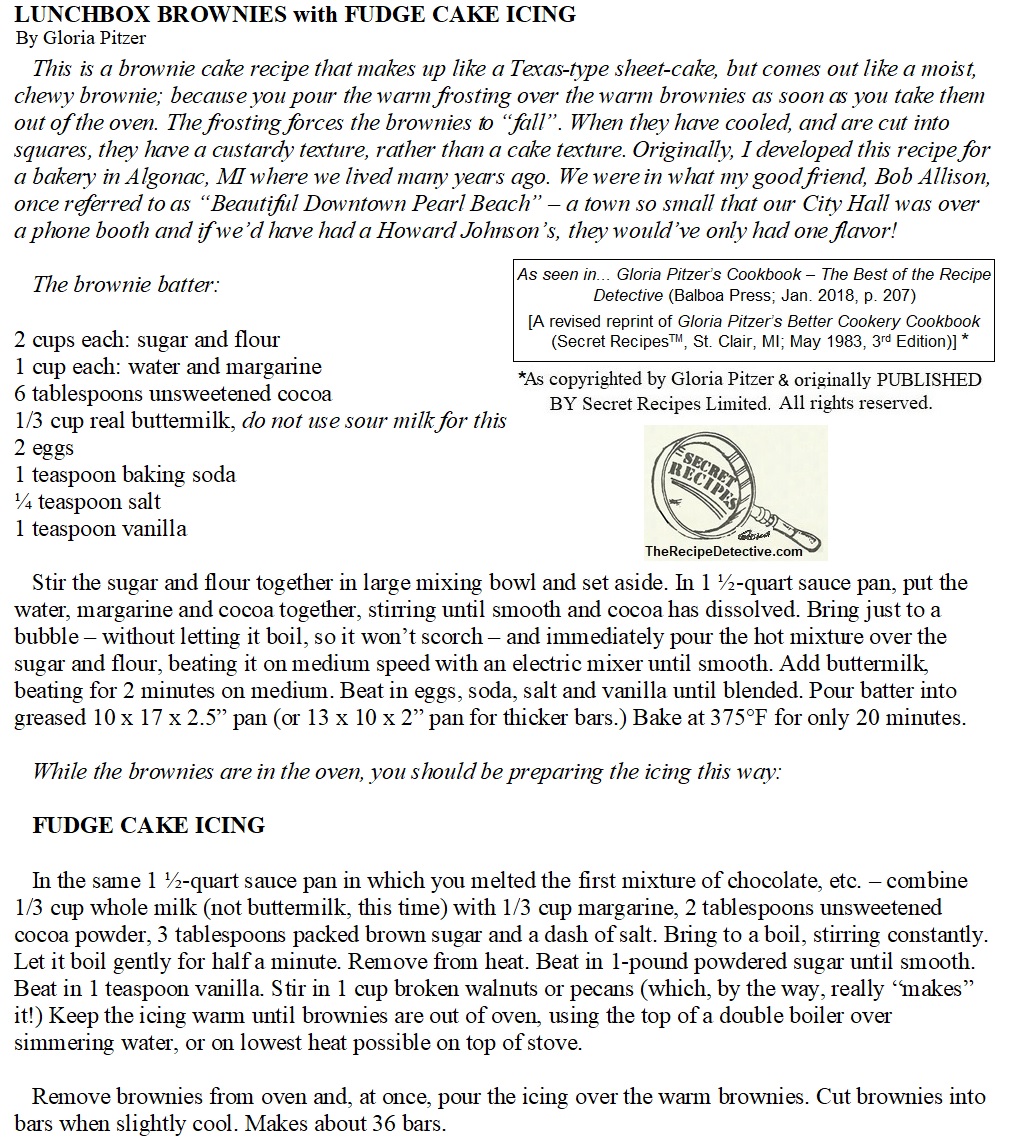 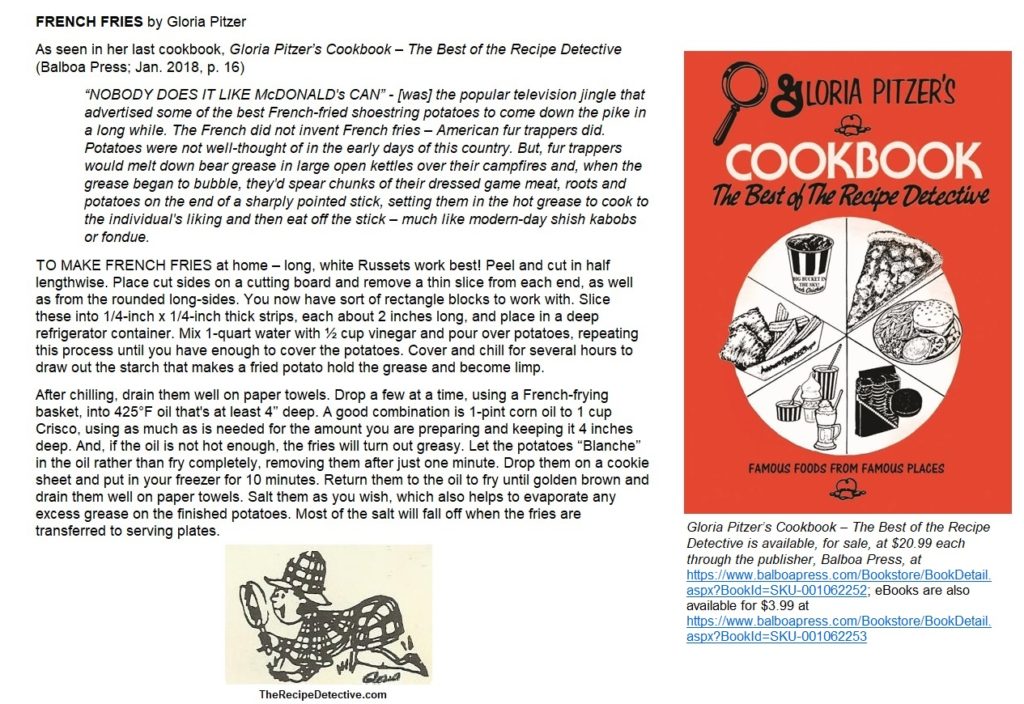 August 13th is… National Prosecco Day, National Filet Mignon Day, and International Left Handers Day! Plus, as the first “Friday-the-13th” of the year, it’s also… National Blame Someone Else Day!