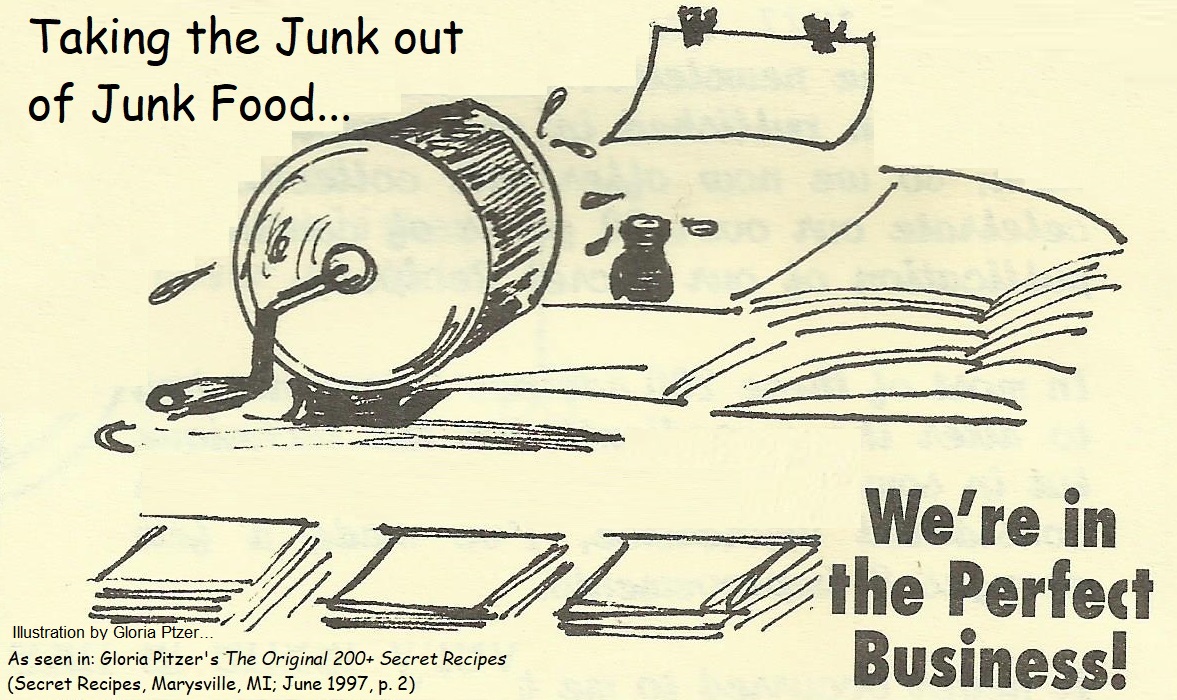 Happy Monday to one and all! Today is also the eve of National Junk Food Day! And as always, #TGIM – since I continually look forward to Mondays as my #52Chances per year to share these MEMORIES OF MY MOM with all of you!

Mom wrote, illustrated, published and promoted all of her 40+ cookbooks (and her newsletter, which ran 1974 through 2000) – mainly by herself but she incorporated our whole family into it in one way or another. It was a cottage-style, dining room table operation. Her cookbooks and newsletters were all quite unique and special in presentation and content!.

My mom built most of her recipe collection (starting in the early 1970s) on the taboo subjects of fast foods and junk foods, when all the food critics were warning the public to stay away from these things, lecturing about how bad they were for our health. That may be so, but as Robert Redford once said, “Health food may raise my consciousness, but Oreos taste better!” – a quote that Mom personally loved and, thus, put it on the first page of her cookbook, Eating Out at Home (Nat’l Home News, St. Clair, MI; Sept. 1978).

[Note: See the “Recipes” tab on this for Mom’s imitation of the Oreo-Style sandwich cookies. Mom calls her version “Gloreo’s”.]

Junk is in the eye of the beholder. Thus, Mom found a way to have her cake and eat it too, by TAKING THE JUNK OUT OF JUNK FOOD, making her own imitations at home, where she controlled the ingredients. It was a break-through that had many food companies, like Stouffers, Hostess, Sarah Lee, and many others up in arms! The idea that someone could possibly duplicate their products at home and then share these secrets with the public was as troublesome, if not more, than the competition they faced in the food industry, itself. 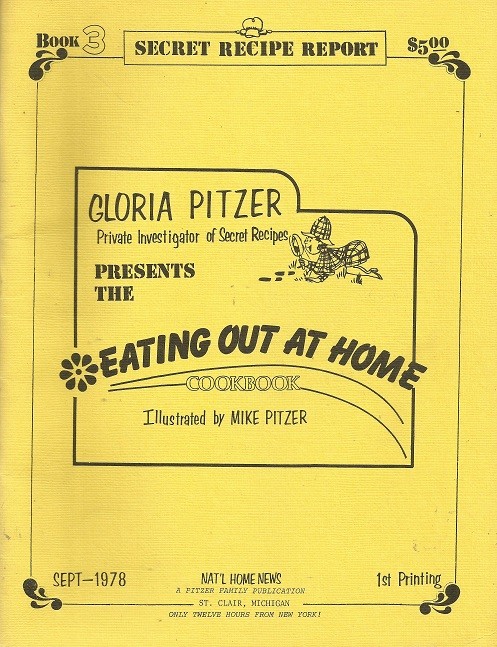 YOU DON’T HAVE TO KNOW exactly how the original dish was prepared by the commercial food chains. All you need is a basic recipe to which you will add that ‘special seasoning’ or that ‘secret method of preparation’ that sets one famous secret recipe apart from those similar to it… 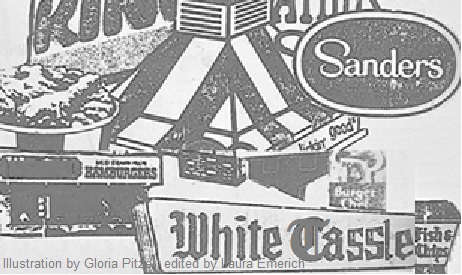 The most remarkable part of the duplication of famous recipes is that you can accept the challenge to ‘try’ to match their [dish or product]. Sometimes, you will be successful. Sometimes you will fail in the attempt. But, at least, it can be done [‘practice makes perfect’], and it certainly takes the monotony out of mealtime when, for reasons of financial inadequacy, we cannot always eat out…even if we could afford to eat at all or most of our meals away from home, wouldn’t that become monotonous in time?

Stop cheating yourself of the pleasure of good food. Eat what you enjoy, but DON’T OVER eat…This is what really causes the problems of obesity and bad health – rather than believing the propaganda of the experts that ‘fast food’ is ‘junk food’…It is not! Poorly prepared food, whether it is from a fast-service restaurant or a [$20-plate in a] gourmet dining room, is ‘junk’, no matter how you look at it…if it is not properly prepared.

TO DEBUNK THE JUNK…don’t think of Hostess Twinkies as junk dessert but, rather, the very same cake ingredients prepared in the Waldorf Astoria kitchens as the basis for their “Flaming Cherries Supreme”. All we did [to imitate the product] was shape the cake differently, adding a little body to the filling and putting it INSIDE the cake, rather than on top, as the Waldorf did! 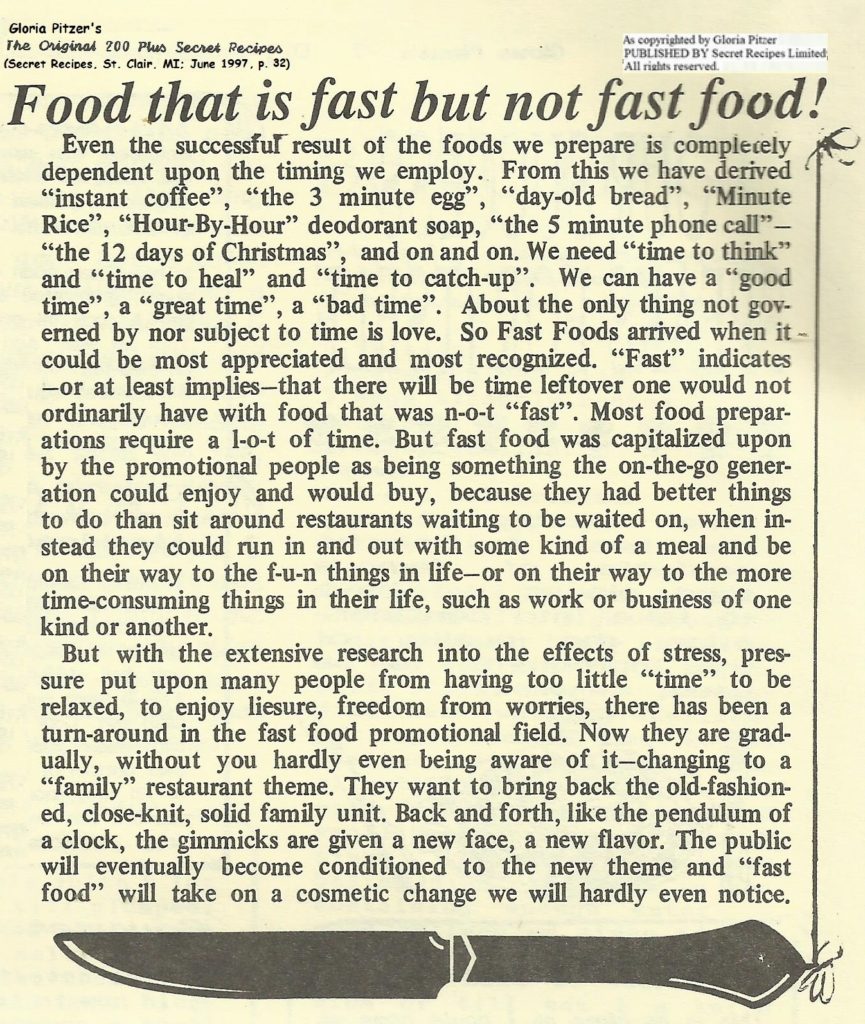 National Junk Food Day is celebrated every year on July 21st, and it is all about indulging in your favorite junk foods – from the grocery store shelves to every “plastic palace” drive-thru – for one day, without guilt. However, keep in mind, National Junk Food Day is not to be confused with National Fast Food Day, which is celebrated on November 16th.

More times than not, “fast food” is considered to be synonymous with “junk food”. But nowadays, a lot of “fast food” places (which Mom called “plastic palaces”) are trying to change up their offerings and some are actually considered to be healthy. According to an article I read at MDLinx.com, “Healthiest Fast Food Options”, some of the “healthy fast food” nominations go to Chick-fil-A’s grilled nuggets, Wendy’s grilled chicken wrap, Taco Bell’s grilled steak soft taco, Subway’s tuna salad sub, and Chipotle’s steak burrito bowl – just to name a few.

In other words, one can say with some certainty that not all fast food is junk food AND not all junk food is fast food! By general definition, “junk foods” are considered to be those foods that are heavily processed; typically containing high amounts of either trans fats, sugar, corn syrup, fructose, or salt (or a combination of any of those). Additionally, junk foods are high in calories. Beware – they are also very high in luscious, tasty delightfulness!

NOTE: Next time you push your cart up and down the aisles of your favorite grocery store, keep in mind that if the food is in a can, box, plastic wrap/package, or the like; it is most likely “junk food”. A lot of grocery store “convenience” foods contain highly processed ingredients. 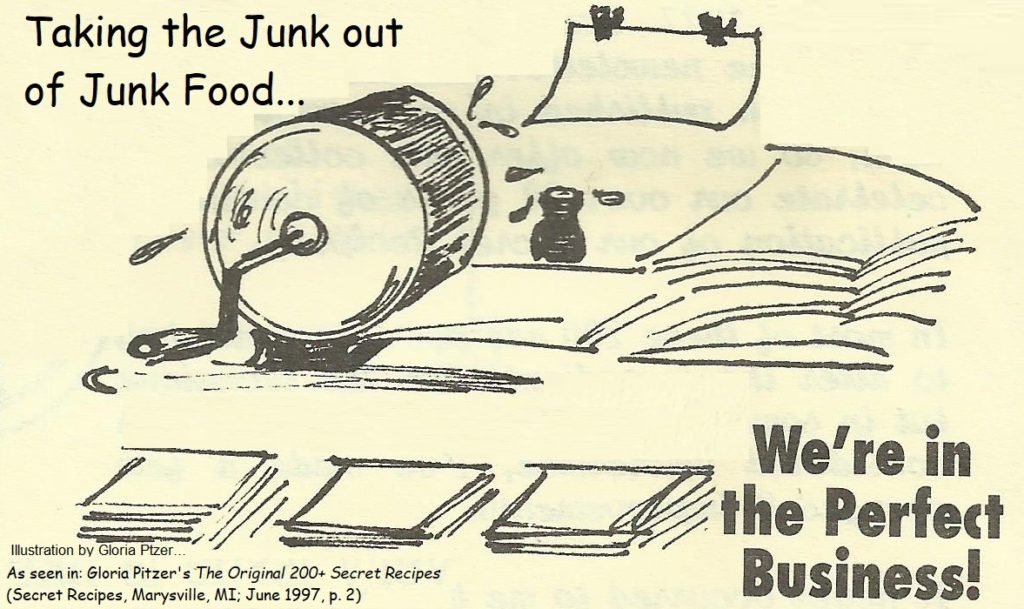 I DO, WITH RECIPES, WHAT RICH LITTLE DOES WITH VOICES!

Imitating the ‘Secret Recipes’ of the food industry has been an exciting experience for me. The critics felt that ‘fast foods’ and restaurant dishes were not worth the effort to duplicate at home, when you can just as easily buy the products already prepared! 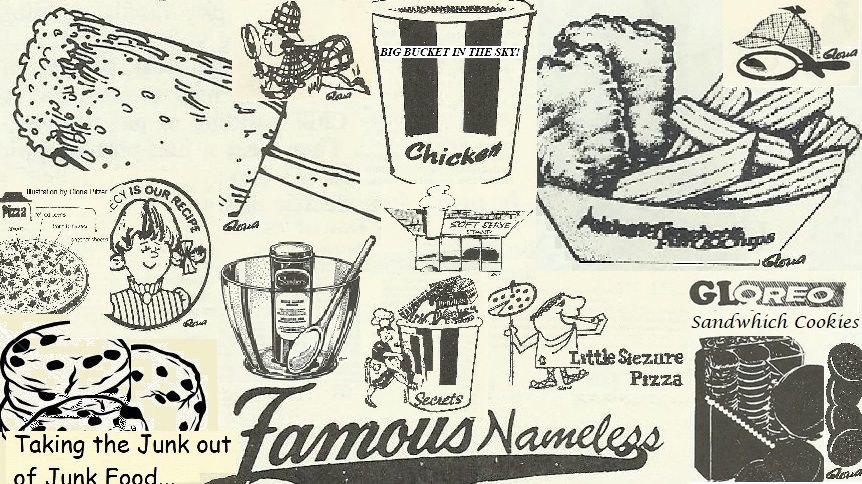 What’s the truth about junk foods? Food experts have been referring to many snack foods and fast food products as ‘junk’ in an attempt to disqualify their value when compared to foods containing high amounts of proteins and vitamins.

No one has confirmed a definition of the expression ‘junk food’. Yet, the public has been conditioned to accept any snack foods, sweets, candies, confections, baked goods and even many beverages as being a member of the junk food family; when, in reality, these are not without nutritional value. 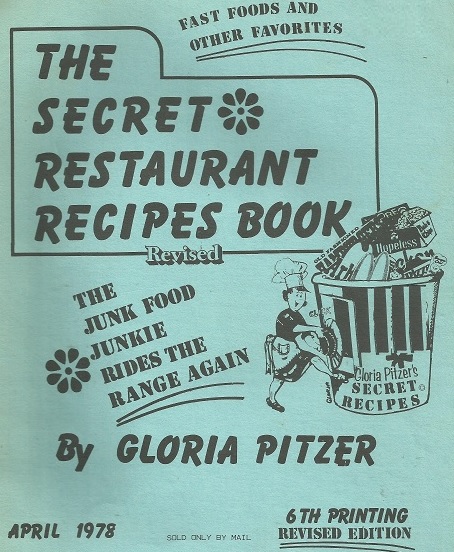 The junk food paradox has caused school systems and other public institutions to ban the sale of any foods we would consider ‘snack’ items, making it illegal, in fact, in the state of Michigan (and some others) if such items are sold to children through vending machines on the premises.

This is infuriating to the good cooks and the more intelligent food chemists among us who know that JUNK FOOD is any food, which is poorly prepared. All food has nutritional value. Some just seem to have more than others. But, in the final analysis, it is purely personal taste that will determine the popularity of one food over another. The fast food industry has been the most successful of any phase in the business. Their success depending largely on the fact that their recipes are all closely guarded secrets!

Junk foods and fast foods are also considered “comfort foods”. Science has shown, time and time again, that emotions and food are very much linked together. It’s widely believed that, in times of stress, “comfort foods” will often make you feel better. These foods provide a nostalgic or sentimental value but have very little nutritional value, if any at all. Cooking is also a great source of heart-and-soul happiness. Between the cooking AND the eating, I get to happily enjoy food twice as much! 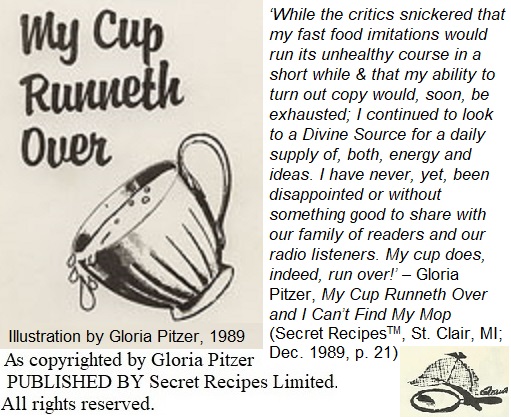 For some of us, every day is “Junk Food Day” but for the rest of us National Junk Food Day is a special opportunity to eat our favorite junk foods – supposedly without the guilt. Speaking for myself, as a “junk food junkie”, they’re ALL my favorites and it’s very hard to choose; so I would most likely ravish myself on everything!

DISCLAIMER NOTE: Junk food may be hazardous to your health! Thus, indulge at your own risk! To me, that’s like telling a former smoker or an alcoholic or a compulsive gambler to “indulge responsibly” in whatever their “crutch” may be – after all, it’s just for a day.

According to TimeAndDate.com: “Studies have shown that consuming junk food ONCE-IN-A-WHILE does not have a negative effect on health – it is only when one eats junk food for a majority of their meals that their diet can be considered unhealthy. Consuming large amounts of foods considered to be ‘junk’, can lead to several health problems, including a high risk of obesity, diabetes, and heart issues.”

On a side note regarding junk food, I’d like to add that You Tube has a really good video called “Junk Food Junkie”, by Larry Groce (1976) at https://www.youtube.com/watch?v=ZLiVeRJTtqo. I also found a lot of information and ideas for celebrating this awesome event tomorrow at Chiff.com. 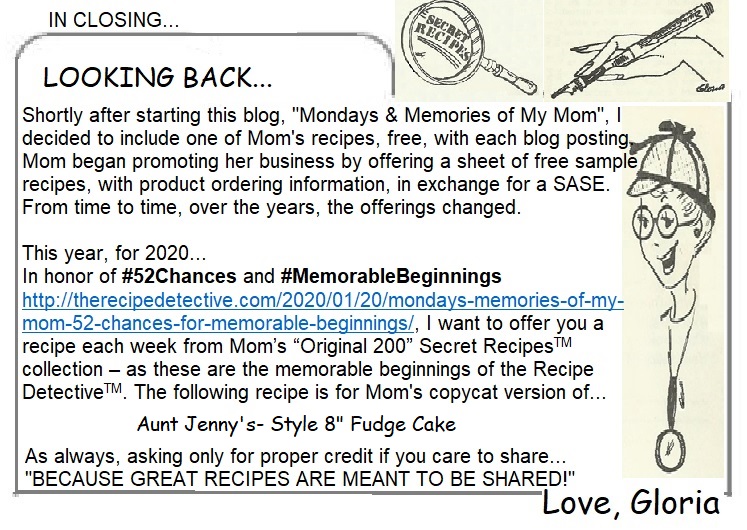 My next visit on the “Good Neighbor” show, with Kathy Keene, is next week. Be sure to tune in – Monday, July 27th around 11am (CDST)/12noon (EDST) – as we’ll be talking about one of most Americans’ favorite junk foods… COOKIES!