Thank God Its Monday and, as such, happy Monday to everyone! I personally look forward to every Monday because they’re my 52 Chances a year, in which I get to share Memories of My Mom with all of you!

Additionally, it’s also National Independent Retailer’s Month and speaking of, both, Independent Retailers and Culinary Arts observances, have you noticed that there seems to be another new resurgence of food (and drink) truck/trailer vendors these days? The last revival of mobile street food was noticed around the time of the 2008 Recession.

Back then, the “fall” of the “Big 3” (in the auto industry) caused a ripple effect throughout the manufacturing industry, especially in the Motor City and its surrounding areas. That directly impacted local Independent Retailers, who survived on the patronage of those auto workers, who were let go or laid-off; causing many of them to close temporarily or go-out-of-business, all together.

I’ve seen many local news stories, over the past few years, regarding the Covid-related health restrictions placed on Independent Retailers – and the restaurant/bar industry, in particular; which seemed to have much more than a ripple effect! There was a huge barrage of waves (aka: elements) that formed a perfect storm.

It was more like a tidal wave effect that put a lot of “Ma-and-Pa”, brick-and-mortar establishments out of business because they couldn’t (or wouldn’t) adapt to new, innovative ways of conducting business as others were doing AND still be able to make a profit – things like online and phone-in ordering, new air filtration systems, outdoor dining, as well as drive-thru/pick-up/delivery options.

Currently, for both born-again and first-time restauranteurs, food/drink trucks/trailers are offering the perfect opportunity to “rebuild”/re-invent a lost business or to experiment and be creative building a new one, while potentially seeing good profits, within a reasonable amount of time, and at less of an initial investment than with a brick-and-mortar business. So I wondered…

“WHEN DID FOOD TRUCKS FIRST BECOME SO POPULAR?”

According to History of American Food Trucks, at Mobile-Cuisine.com, the “Chuck wagon” was basically the first American mobile “food truck/trailer”, invented in 1866 by Charles Goodnight “to feed cattlemen and wagon trains traversing the old West.”

Per Carly Hallman’s article, History of Food Trucks, as seen at TtitleMax.com (no date available), “Mobile food vendors began to increase in popularity around the 1950s when refrigerated ice cream trucks began selling ice cream and other frozen products aimed primarily at children.”

Likewise, Lorrie Mealey wrote a nice article (as seen at TheBalanceSMB.com, updated April 2021), which is also titled History of Food Trucks, about the first resurgence of food trucks that came, as I mentioned above, around 2008.

Food truck menus have expanded and been overhauled from the traditional choices like hamburgers, hot dogs, French fries, chili, macaroni and cheese, sandwiches, tacos, or pizza. A variety of “natural (plant-based) foods” and ethnic-style menus have joined the food truck/trailer industry. As such, their popularity has grown by leaps and bounds, especially among the younger generations.

According to an article at WebstaurantStore.com, which referenced an IBISWorld Inc. report, the majority of street food patrons are millennials. Gen-Y’s middle-class (about 25 to 44 years old) represents 43%, with another 20% coming from the Gen-Z consumers (under 25 years old).

Despite all the challenges that food truck owners face with local government red-tape, opposition from local restaurant owners, and the strong rivalry from the area’s fast food chains, more and more Independent Retailers are taking the leap of faith to start their own business as food truck/trailer owners and operators.

BEING IN BUSINESS FOR OURSELVES

IN OVERCOMING JUST the ordinary aggravations of being in business for ourselves, we also had to iron out the little conflicts over who would handle certain aspects of the work and how it would be handled. We were constantly having to compromise. That was the toughest step! Paul’s mother surely would have been proud of us and what we had accomplished together, if she had been able to witness any of this.

It is not easy to carry out the details of a demanding schedule and keep harmony at a priority, making every effort to keep the atmosphere healthy and still harmonious. To me, this was of utmost importance. Sometimes being in complete agreement was impossible.

But the error to be corrected was always in separating the act from the person. That, alone, made forgiving so much easier and without that forgiving we could never have worked together all these years – seven days a week and 52 weeks a year.

To be able to overlook the things that are not important has made the compatibility easier to experience, too. Being picky about something, we have said to each other, could only lead to increased discontent and sometimes snowball right into a major confrontation of shouting and fist-clenching. Thank goodness, neither of us ever let it get to that stage, since we both wanted to have the best possible relationship. We work at it! 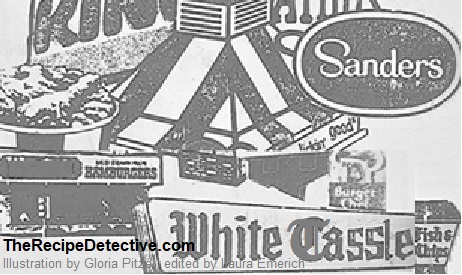 It’s more common, now, to find food truck/trailer vendors in other locations than the usual “downtown, busy street corners” of heavily populated cities. They’ve moved out to the ‘burbs, as well! In St. Clair County, where I live, it’s not as densely populated as it is in Wayne County (where Detroit is located).

However, the growth of mobile food/drink merchants, here, is noticeably evident everywhere I go; especially now that the pleasant, summertime months are upon us. I’ve seen them operating near campgrounds, hospitals, industrial parks, construction areas, community pools and recreational parks; besides being in the usual shopping and business districts.

It’s not uncommon to see a variety of food trucks/trailers turn up at big events like festivals (4th of July weekend, there was also a “Food Truck Festival” in one of Detroit’s suburbs); as well as car shows/races, sports games, and – these days – there are also some for hire, to cater events like weddings and reunions!

According to an interesting article by Vivian Glang, How to Start a Food Truck Business (July 2017) – as seen at NerdWallet.com – when starting up a mobile food business and creating a business plan, you’ll want to budget these important expenses into your operating costs:

Another cost, which she didn’t mention, as it occurs to me, is for the gas and maintenance of the truck, itself. There are many pros than cons to owning a food truck/trailer business, as there is with any small business. However, the overhead costs for a food truck/trailer are potentially far less than for a brick-and-mortar establishment.

Even though it’s a small, confined work space, it’s manageable since only a few people are needed to operate such a unit. Likewise, the menu choices are best limited to about five (no more than 12) quick and easy selections. Having mobility, to go to the masses, is another advantage – but owner/operators must know the vendor laws wherever they go.

When considering advertising costs, food truck/trailers can also serve as “mobile billboards”; decorated/painted to attract attention, highlighting who they are and what they offer. Did you know that there are many marketing theories about how colors, alone, effect potential consumers? There’s a subject for another week!

Thursday, July 14th is… National Grand Marnier Day, National Tape Measure Day, and National Mac & Cheese Day! In honor of the latter, here is a re-share of Mom’s imitation of ‘Woolworth’s Mac And Cheese’, from her “Original 200” collection. 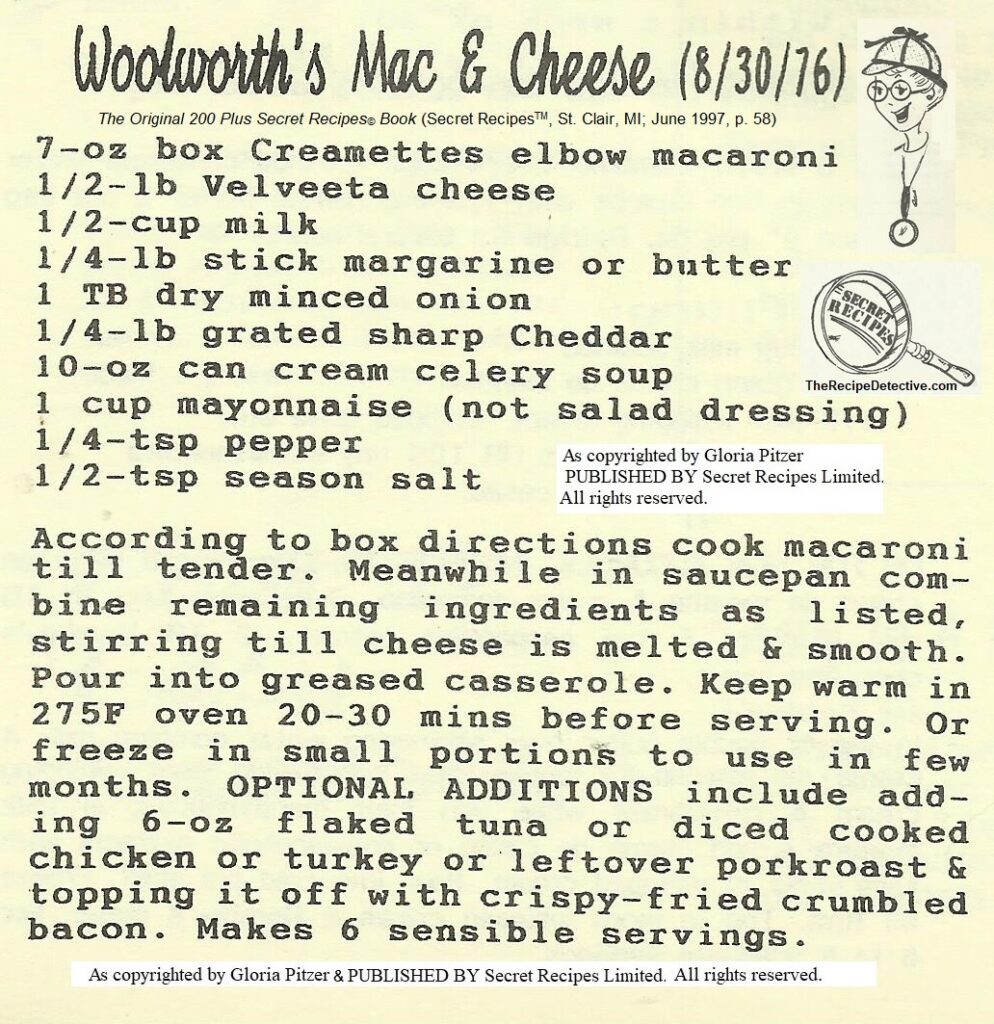 July 16th is… National Corn Fritters Day and National Personal Chef’s Day! Plus, as the third Saturday in July (for 2022), it’s also National Strawberry Rhubarb Wine Day and Toss Away the “Could Haves” and “Should Haves” Day!