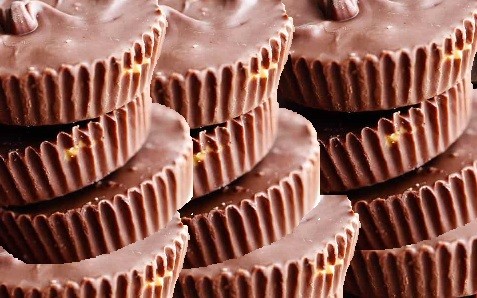 The development of this recipe grew from a request made by a local group of parents whose children followed the Feingold diet to arrest hyperactivity. It became one of my most popular recipes across the country – and when I heard from the people at Hershey’s, in Pennsylvania, they were quite upset with my having such a recipe. I assured them that the name ‘Recess’ was drawn from the dictionary definition of the word, meaning ‘a hidden or secret place’ – quite in keeping with the theme of my series. And, because Hershey’s makes the famous product by a similar name (of which there are many in various industries, such as Goodyear and Goodrich both making tires), naturally, I recommended using Hershey’s chocolate in this recipe. I have had recipes sent to me by those who also try to imitate the famous product, but they each contained powdered sugar and were more like a cookie than a candy. I detected no powder sugar in my samplings of the famous product – so I didn’t include it in my imitation.

SPECIAL NOTE: The “Recess Peanut Butter Cups” imitation has had a few revisions over the years since Gloria first printed her make-alike version in her cookbook, The Secret Restaurant Recipes Book (Nat’l Homemakers Newsletter, Pearl Beach, MI; Jan. 1977, p. 32); when it originally called for Nestle’s milk chocolate candy bars and noted “do no substitute”. After a few discussions with the Hershey’s company, maker of the original product she was duplicating, Gloria offered to only use, and recommend, Hershey’s chocolate instead.

Mondays & Memories of My Mom – Happiness Is…