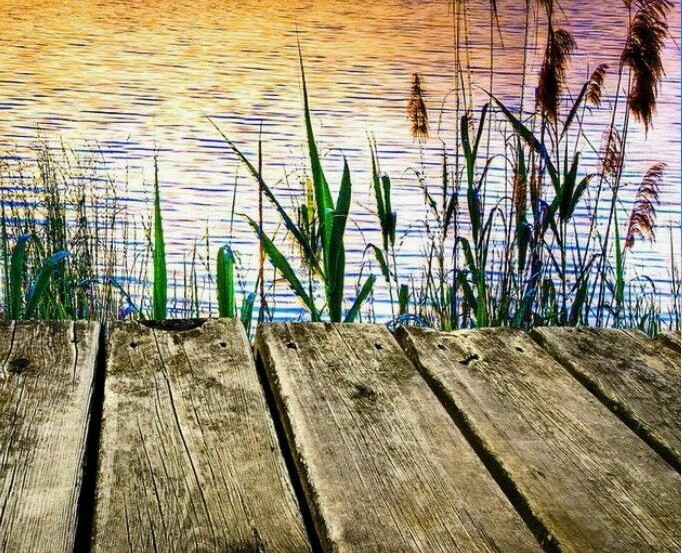 This memory is not exactly of my mom…not directly anyway. Some of my favorite early childhood memories are of fishing with my dad and two brothers. My brothers didn’t very much care for me tagging along, but Dad was happy with my enthusiastic interest in fishing… especially, I think, because I liked to find the worms with which for him to bait our hooks. I was pretty good at it too!

We were living in the Algonac-Pearl Beach area (of Michigan), on the beautiful St. Clair River (part of the St. Lawrence Seaway), across from the North Channel (west of Harsens Island) that flows into Lake St. Clair. We fished off the end of our dock often, Spring through Fall; for bass, perch, walleye, whitefish, trout, salmon, etc. – whatever was in season at the time.

One day, when I was about 7 or 8 years old, fishing with my dad and brother, Mike; my line caught something that I just couldn’t pull in by myself. Dad came over to help me. I was very excited that I had caught something, and it was apparently BIG because I couldn’t reel it in by myself! After a couple minutes of struggling, even with Dad’s help, we finally got it pulled up to the surface of the water, only to find it was an old shoe filled with mud! Dad helped me to cast my line out again and I patiently waited for a real bite. Then, I got a rather strong pull on my line and Dad had to help me reel it in again – this time it was an old coffee can filled with mud! My brother, Mike, got the biggest kick out of that and roared with laughter!!!

Dad set me back up with a new worm on my hook, to try again on the other side of the dock, hoping I wouldn’t catch another shoe or can of mud. Within MINUTES I had hooked something big and heavy again! Mike teased me that it was another can of mud. But, as Dad helped me, again, to get the object to the surface, we saw it was a HUGE catfish, which broke my line as soon as we got it up on the edge of the dock. It flopped back into the water and swam away quickly. So, I do have a story about “the one that got away” – and it was real!

Mom drew this cartoon in 1971, for her syndicated column, Full House as Kept by Gloria Pitzer, based on my love to fish, and my brothers’ irritation of it: 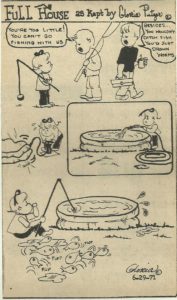 When it was raining outside, and I couldn’t go out on the dock to fish, Mom would set me up on our screened-in porch with a large tub of water, a lawn chair and a “pretend” pole she made from a stick, with a piece of rope tied to it and a rock tied to the other end of the rope (as seen in the photo below, with my little sister.) This reminds me of a “meme” (a humorous image, video, or piece of text) that I like, being shared on Facebook in many forms that, basically, says something along the lines of: “When I was a kid… I didn’t have cable, a computer, internet, Nintendo, X-Box, or Wii. My toys were a bike, fishing pole, bat, ball, mitt, sand box, swing set, trees and so much more. My playroom was the outside world and I had a curfew and drank water out of a hose. If I didn’t eat what my mom made me, I didn’t eat. I didn’t dare tell my parents ‘no’, nor did I dare talk back to them disrespectfully. Life wasn’t hard, it was just life… And I survived.’

I love the aroma of a good fish fry!!! Mom had a few good recipes for coating and frying the fish we caught. Below is Mom’s 1983 make-alike version of Long John Silver’s fish batter, as seen on page 111 in her last book, Gloria Pitzer’s Cookbook – The Best of the Recipe Detective [published by Balboa Press (January 2018, 1st Printing) – a re-write by me, Laura Emerich, of Mom’s famous, self-published book, Gloria Pitzer’s Better Cookery Cookbook (May 1983, 3rd Printing)], asking only for proper credit if you care to share it.

LONE JOHN SLIVER FISH BATTER – Similar in texture and flavoring to my ‘Archer Teacher Fish Batter’, but made a bit differently. You can pirate your way through a seaworthy voyage of vittles with this crispy fish coating!

½ cup each: flour and biscuit mix

grated rind of half a lemon

Combine flour, biscuit mix, season salt and sugar. Set aside. Beat egg and oil, adding to half of the club soda or beer. Stir in flour mixture, plus enough more club soda or beer to make it the consistency of buttermilk (as in my “Archer Teacher Batter” recipe.) Stir in lemon rind and onion salt. Tenderize fish fillets in buttermilk as directed in my Treacher recipe (see Index.) Drain fillets and dredge in plain flour. Allow them to dry a few minutes. Dip to coat in prepared batter and fry, a few pieces at a time, in 425°F oil/Crisco mix as directed in my Treacher recipe. When golden brown, remove and keep warm on a paper-lined cookie sheet in a 300°F oven until all pieces have been fried. Serve with my Tartar Sauce (see Index.) Serves 4 to 6 sensibly!

This updated version is from Mom’s “Free Recipes & Information” sheet (2000), asking only for proper credit if you care to share it: 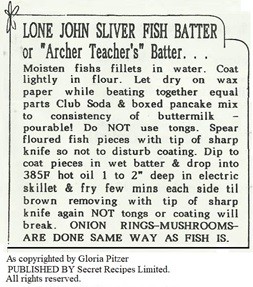